Steve Smith: We got our butts kicked 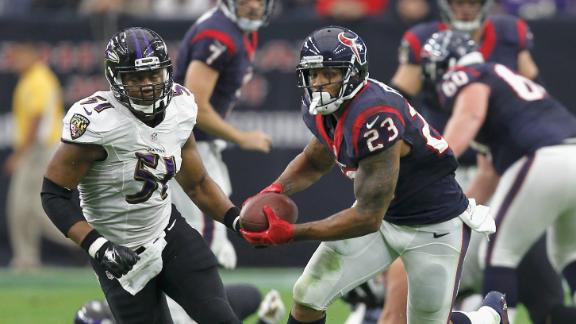 HOUSTON -- Wide receiver Steve Smith expressed his frustration more than any other player after the Baltimore Ravens' 25-13 loss at the Texans.

"Bottom line is offensively, we just got our ass kicked," Smith said. "That's what happened. That's what the score looks like. That's what it looks like when you just lose. That is the consequences of losing."

Smith's frustrations weren't contained to just the team's on-the-field performance, he also took aim at those that will criticize the team's play.

Known for his volatility, Smith then lashed out at a reporter who asked about his level of concern about the offense. The Ravens managed a season-low 211 yards of total offense, completing 42 percent of their passes and averaging 2.1 yards per carry.

The Ravens lost control of their playoff fate by getting upset by the Texans on Sunday. They were eliminated from the AFC North race and will need other teams to lose in order to make the postseason.