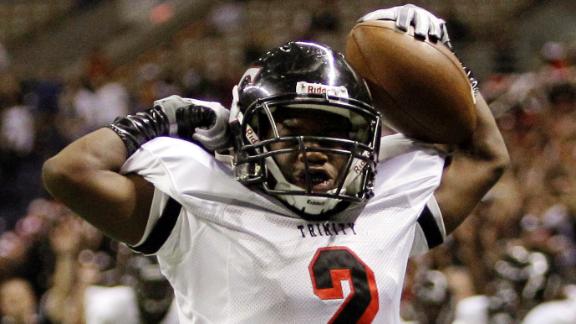 A former coach and family friend of theHoward Bisonrunning back who was one of two suspects fatally shot during an attempted robbery in Texas says Terrence Neal Tusanwas a "good kid" and student.

Tusan, 22, was killed on Sunday at a Denton, Texas, apartment complex. Denton police say five people were involved in some sort of altercation during the home-invasion robbery.

"He was a good kid," Clarence Nevels, a former coach and mentor to Tusan, told the Denton Record-Chronicle. "He had good grades and was just down at AT&T Stadium for Thanksgiving Day Madness Youth Football speaking to students about believing in themselves."

Tusan, who was at home on holiday break from the Washington D.C., school, was killed along with 18-year-old Jakobi Dmon Gipson.

Nevels, who said he knew Tusan for 15 years, told the Denton newspaper that Tusan didn't have a criminal history and wasn't known to be associated with drugs.

"You have to wonder, what would be the purpose to throw his life away?"Nevels said, according to the Record-Chronicle's report.

Tusan, a junior for Howard, had 331 rushing yards with two touchdowns this season as a backup running back, including a 70-yard TD in a 38-25 loss to Rutgers.

"Terrence was the only child [his mother, Donna Tusan] had left, and now he is gone, too," said Nevels, who the newspaper reported was speaking on behalf of the Tusan family. "We just want to ask anyone looking into this incident to investigate further."