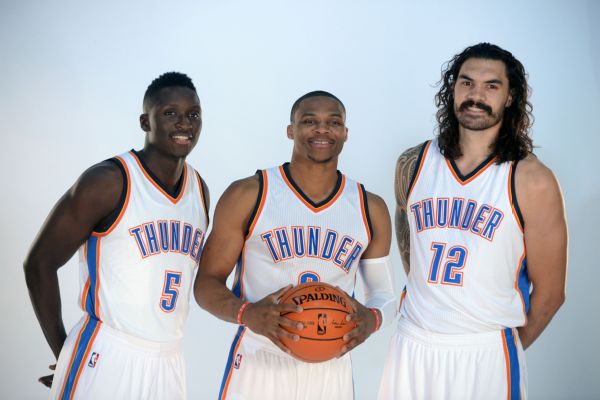 Guard Andre Robersonhad also been engaged in extension talks with the Thunder but didn't reach a deal. Roberson will be a restricted free agent next summer.

"We are excited to extend our partnership with Steven and Victor," Thunder general manager Sam Presti said in a news release. "Both players represent the Thunder's present and future, exhibiting the values that the Oklahoma community and our organization hold in high regard: hard work, team first, resiliency and citizenship."

In the wake of Kevin Durant's departure and Russell Westbrook's extension, the Thunder have transitioned to reshaping the roster around Westbrook.

With unknowns ahead in a new collective bargaining agreement, the Thunder are holding on to what they can control. The Thunder were poised to become potential players in free agency next summer and chase players such as homegrown star Blake Griffin. However,with cap holds expected to jump in the new system, getting to max-level cap space while still retaining Adams and Oladipo became an unlikely scenario.

The Thunder were keen on extending Adams and Oladipo to keep them from getting to restricted free agency. As many as 20 teams could get to max-level cap space next summer, so anything less than that for either player potentially saves the Thunder a lot of money.

Oladipo's $84 million contract is about $21 million below a max deal, and Adams' is $4 million under the max number. Both players expressed a desire to re-up with the Thunder long-term, with Oladipo saying at the team's media day in September that he had dreamed of playing for the Thunder as long as a year ago, and he didn't have an eye on anywhere else.

"I literally thought about being here a year ago and thought what it would be like to be on this team. And for it to actually happen, it's a surreal experience, and I know that it's supposed to be the way it is now," he said. "I mean, it might sound crazy, but I'm definitely excited about it."

Oladipo, 24, was traded to the Thunder on draft night in a deal that sent Serge Ibaka to the Orlando Magic. In three seasons, Oladipo holds career averages of 15.9 points, 4.3 rebounds and 4.0 assists per game.

Adams, 23, emerged as a key part of the team's foundation last postseason, when he averaged a double-double in the series against the Spurs and Warriors. In three seasons, Adams is averaging 6.3 points and 6.0 rebounds per game.

Oladipo starting out hot with the Thunder
With Victor Oladipo signing an extension with the Thunder, check out some of his best plays since joining Oklahoma City this season.