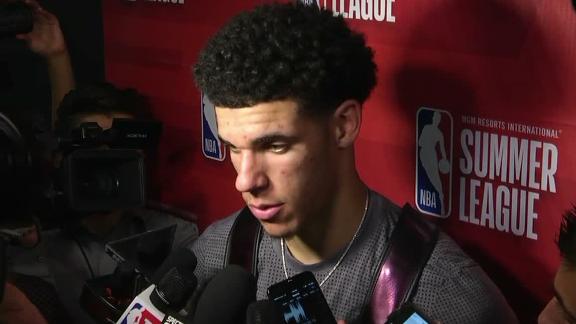 LAS VEGAS -- A sellout crowd invaded the Thomas & Mack Center on the UNLV campus Saturday to see two of the NBA's greatest rivals square off. While there wasn't much at stake for the Boston Celtics and the Los Angeles Lakers in the NBA summer league, the performances of their 2017 draft picks offered hope that the rivalry might soon emerge from its recent dormancy.

All eyes were on the matchup of the Lakers' No. 2 pick, Lonzo Ball, against Celtics No. 3 pick Jayson Tatum. Both players delivered in very different ways, but later picks Kyle Kuzma (Lakers) and Semi Ojeleye (Celtics) also impressed in a game Boston won 86-81.

Let's take a closer look at the performances of the four rookies.

Ball bounces back from rough debut

After Ball struggled during his first summer league game Friday night, shooting 2-of-15 in a loss to the LA Clippers, playing 24 hours later provided him the opportunity to bounce back quickly.

Showing no loss of confidence, Ball made a 3-pointer on his first shot early in Saturday's game. While his shot continues to elude him -- he shot 1-of-5 from 3-point range and 5-of-13 overall, though he did make a 3 late in the game that didn't count because he stepped out of bounds first -- Ball still finished with a triple-double of 11 points, 11 rebounds and 11 assists.

After the Clippers went under pick-and-rolls and dared Ball to shoot pull-up 3s, he was more aggressive attacking off the dribble against the Celtics. Getting into the paint allowed Ball to set up teammates, which he again did with hit-ahead passes in transition, several of the highlight variety. Ball's eight defensive rebounds were particularly valuable as they allowed him to instantaneously initiate the fast break.

Because Boston's offense was less pick-and-roll-centric, Ball didn't experience as much difficulty containing dribble penetration as he did Friday. Overall, it was a performance that showed why Ball is such a special prospect despite the limitations that his opening game reinforced. The Lakers outscored the Celtics by seven in Ball's 34 minutes, losing the game because they were minus-12 in the six minutes he spent on the bench.

If basketball scored shots by their difficulty, along the lines of figure skating, Tatum would easily average 30 points. Even when Tatum's strength and footwork don't yield makeable shot attempts from the midrange, he's capable of knocking down turnaround jumpers and fadeaways with a hand in his face.

Of course, Tatum still averages plenty of points under our conventional scoring method, including a team-high 27 on Saturday night. His contested shot-making was good enough for Tatum to shoot 9-of-19 from the field, but he boosted his efficiency by going a perfect 8-of-8 from the free throw line.

The sheer variety of how Tatum scores remains his most impressive selling point in summer league. One play he's posting up a smaller defender. The next he's isolating a bigger one, or coming off a curl, or finishing powerfully in transition.

Tatum's strength also works in his favor on the glass. After averaging 9.7 rebounds in three games at the Utah Jazz Summer League earlier in the week, Tatum topped that with 11 boards. And while he's unlikely to become a defensive stopper, Tatum delivered an impressive block when he stoned free agent Travis Wear moments after teammate Jaylen Brown did the same thing to Josh Hart. The two defensive highlights keyed a Celtics run that turned the game in their favor.

Tatum was also integral in closing this one out, scoring six points in the final 2:34 as Boston turned a game that was even into a victory.

In three years at Utah, Kuzma was never exactly a stretch-4. He ramped up his 3-point attempts to 84 as a senior but made them at just a 32.1 percent clip and topped out at three 3s in a single game. That made it stunning when Kuzma showed up at the NBA's draft combine and went 4-of-5 from beyond the arc in his lone scrimmage.

Kuzma's combine performance opened eyes around the league, and he built on it with strong individual workouts that pushed him into the first round. The Lakers drafted Kuzma with the No. 27 pick they acquired from the Brooklyn Nets in the trade that also brought center Brook Lopez to L.A.

Apparently, Kuzma's shooting from the longer 3-point line was more than just a one-game fluke. Starting on Saturday after coming off the bench in the Lakers' first game, Kuzma fired up 10 3-point attempts, making five of them. While Lopez will serve as a stretch-5 next season, the Lakers didn't previously have a power forward with consistent 3-point range. Starter Julius Randle shot 27 percent on 3s last season, and backup Larry Nance Jr. shot 27.8 percent. If Kuzma's accuracy persists, he could provide a useful complement to their skill sets.

Of course, Kuzma might want to be a bit more selective overall. He attempted a game-high 26 shots, going a subpar 7-of-16 inside the arc. Despite strong athleticism, Kuzma struggled to finish around the basket and also got overly ambitious with some of his post-up attempts. Still, Kuzma's 31 points and nine boards made a strong impression.

After trading Avery Bradley for Marcus Morris on Friday, Boston's roster is already overflowing with combo forwards before even considering second-round pick Ojeleye, taken No. 37 overall out of SMU.

The chiseled Ojeleye has the ability to defend multiple positions. Twice during the week in Salt Lake City, he switched on guards and gave them no quarter off the dribble, forcing missed shots. At 6-foot-7, Ojeleye might be strong enough to defend many power forwards, much like 6-6 Celtics starter Jae Crowder.

During his lone season at SMU after transferring from Duke, Ojeleye shot an impressive 42.4 percent from 3-point range. Nonetheless, he also never made as many 3-pointers in a college game as he did Saturday. Ojeleye had five of them, including a crucial one as part of the 8-0 run that helped Boston take control of the game.

Ojeleye was less impressive offensively at summer league in Utah, shooting 6-of-19 from the field. And because of their depth at his position, the Celtics might not have playing time -- or even a roster spot -- for Ojeleye this season. Still, if he performs anything like he did Saturday night, Ojeleye will force his way into playing time one way or another. 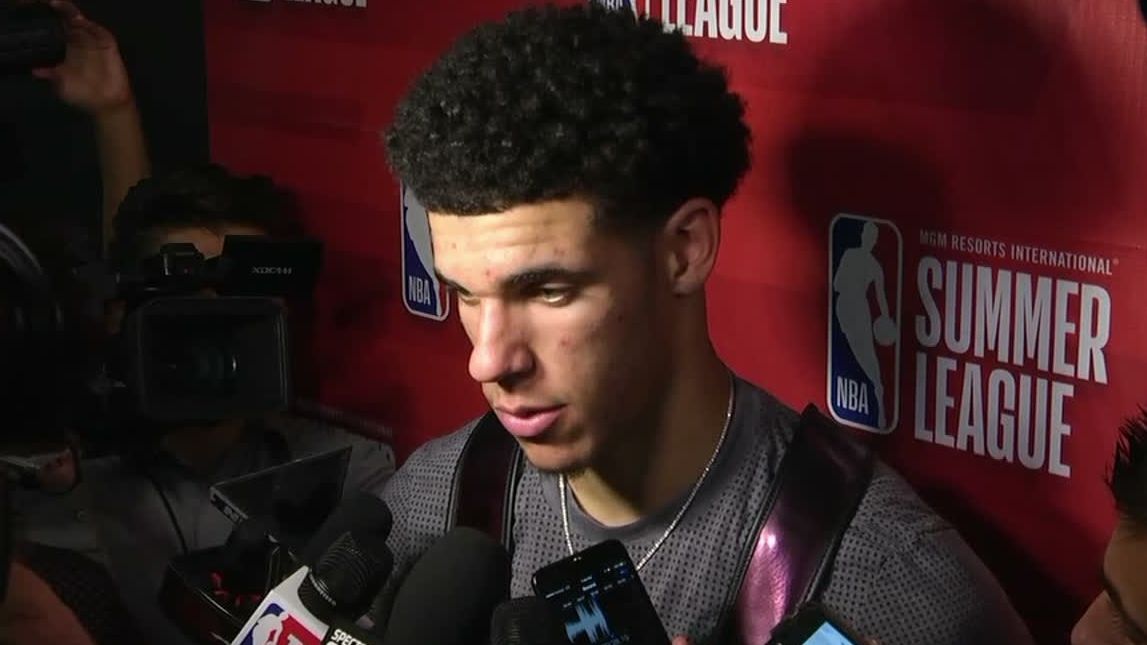 Lonzo won't stop shooting despite early struggles
Lonzo Ball acknowledges his shot is off at the moment, but it won't hold him back from shooting in the future.