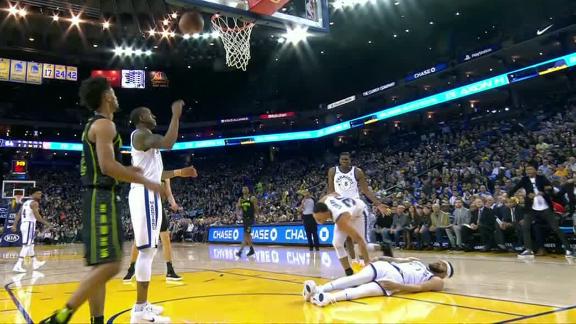 Golden State Warriors guard Stephen Curry will be re-evaluated in three weeks after an MRI showed a Grade 2 MCL sprain in his left knee, the team announced Saturday.

The timetable means Curry, who already has missed 21 games this season, could return near the start of the playoffs. He has played only 51 games this season and is on pace for the second-fewest games of his career.

Curry, who returned to the lineup Friday after missing six games because of a right ankle injury, suffered the new injury late in the third quarter of a106-94 win over the Atlanta Hawks.

The injury occurred when teammate JaVale McGee elevated for a block attempt and ended up falling on Curry's left leg. The two-time NBA MVP immediately began hopping and then limping in pain.

Curry struggled to get to the locker room and did not return.

Said McGee:"I was just trying to block a shot, and I ran into him."

Curry, who scored 29 points on 10-of-18 shooting in 25 minutes Friday, was playing his first game in low-top shoes. He normally wears a mid- or high-top shoe as well as braces during competition because of his history with ankle injuries.

The Warriors are hobbling as they approach the postseason. Klay Thompson (hand fracture), Draymond Green (pelvic contusion) and Kevin Durant (rib contusion) are all sidelined. Green is probable for Sunday's game against the Utah Jazz; Thompson and Durant are both out.

Through Friday, the Warriors led the league in games missed by All-Stars due to injury (47). The Pelicans are second with 38.

With Curry on the floor, the Warriors are averaging 120.4 points per 100 possessions -- the highest figure in the past 20 seasons, according to NBA Advanced Stats.