Which Lakers prospects are showing potential to help LeBron? 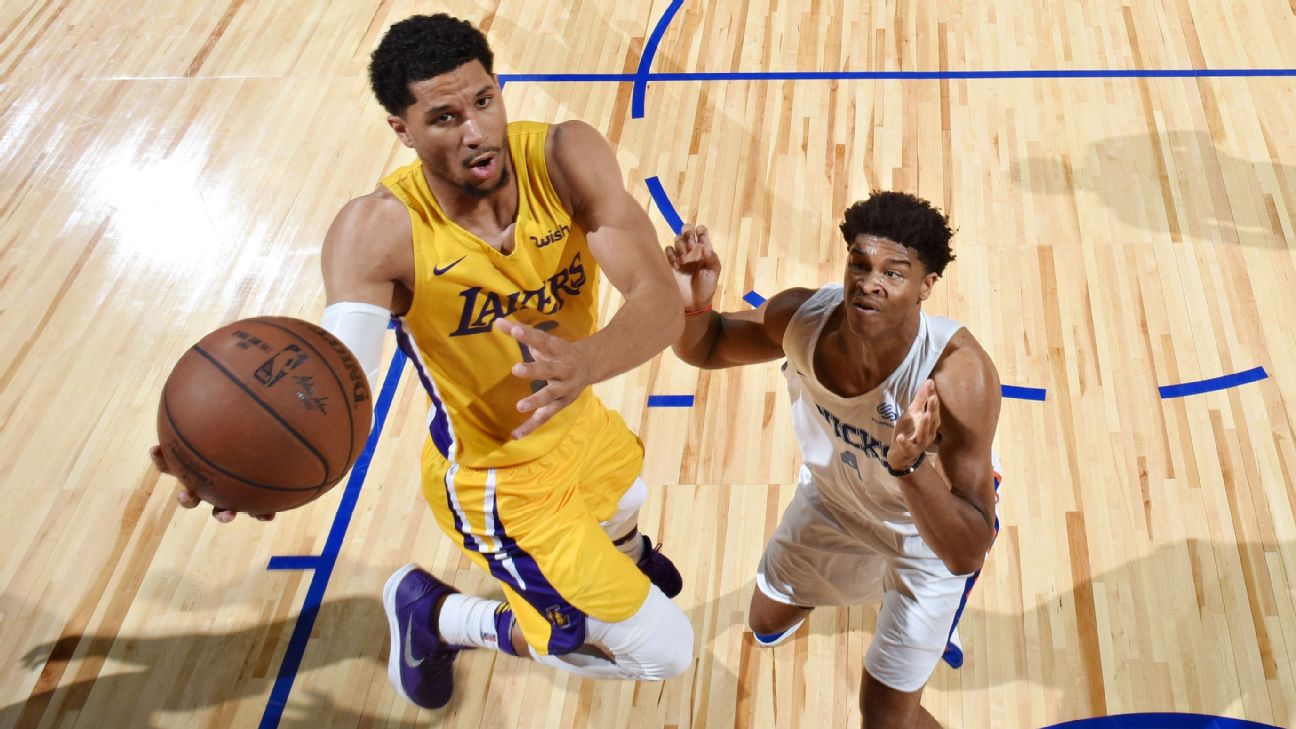 LAS VEGAS -- For the first time in several years, the NBA Summer League seems unlikely to be the highlight of theLos Angeles Lakers' season.

The past two summers, Lakers fans have flocked to Las Vegas, where the success of teams led by No. 2 overall picks Brandon Ingram and Lonzo Ball has contrasted with the Lakers' futility during the regular season. Last July, Ball and fellow first-round pick Kyle Kuzma led the Lakers to the NBA Summer League championship, the only title one of the league's most storied franchises has won in recent memory.

While expectations shouldn't be quite that high, the arrival of LeBron James via free agency has made the Lakers' regular-season roster far more compelling. And since the Lakers finally sent their own lottery pick to the Philadelphia 76ers to complete the distant sign-and-trade for Steve Nash, No. 25 pick Moritz Wagner is the highest-profile rookie on this summer's roster. Yet L.A. has still started 3-0, extending the team's winning streak in Las Vegas to nine consecutive games.

Now the question is not so much whether the Lakers can find their next superstar in summer league, but instead the kind of role players they'll need to surround James -- and perhaps another All-Star added sometime over the next year.

That list starts with Josh Hart, the least-heralded of the Lakers' three first-round picks in 2017 but a solid contributor as a rookie nonetheless. Hart told ESPN's Ohm Youngmisuk beforehand he wanted to "dominate" this summer. That's exactly what Hart did during Tuesday's 109-92 win over the New York Knicks.

Hart's most obvious contribution was a team-high 27 points. He started out hot, putting up 11 points on 4-of-5 shooting in the first quarter, and was able to compensate for atypically poor 3-point shooting (4-of-12 beyond the arc) by getting to the free throw line 10 times and making seven of those attempts. Improved ballhandling has helped Hart show the ability to do more than play the 3-and-D role he did as a rookie.

Make no mistake, Hart still excels at the defensive part of that role. After Knicks rookie Kevin Knox heated up in the third quarter, making all four of his 3-point attempts and scored 16 of his game-high 29 points to tie the score, Hart asked back in the game to cool him off. Knox had only two points on 1-of-6 shooting in the fourth quarter as the Lakers pulled away.

Second-round pickSvi Mykhailiukwas also key to that surge, following Hart's 3 with two of his own back-to-back as part of a 16-0 Lakers run. On a team that's light on outside shooting, Mykhailiuk could carve out a role if he can maintain or improve upon his 37 percent 3-point shooting this summer.

As for Wagner, he played only nine minutes Tuesday before leaving because of a left ankle sprain and knee strain. However, in that span as all summer, Wagner impressed on the glass. He has pulled down 13.4 rebounds per 36 minutes so far, a dramatic improvement on the 9.3 Wagner averaged in that span at Michigan last season.

Wagner shows the ability to grab tough boards in traffic, and his poor shooting percentages this summer (43 percent on 2s, 28 percent on 3s) offer a misleading impression of his offensive skill. With JaVale McGee the Lakers' only addition at center, Wagner stands, at this point, to battle Ivica Zubac for minutes in the middle as the team's only stretch-5 option.

The other two Lakers under contract for 2018-19 seem less likely to contribute next season. Point guard Alex Caruso, who earned a two-way contract with his strong play in Las Vegas last summer backing up Ball, got pushed down the depth chart by the addition of Rajon Rondo. Caruso does offer the Lakers a reliable third point guard, meaning they don't have to spend an NBA-only roster spot on the position.

There's also the Lakers' other second-round pick, 18-year-old German wing Isaac Bonga. Despite the Lakers bringing him to the NBA rather than stashing him overseas, Bonga -- who, like Mykhailiuk, signed a three-year deal that is not fully guaranteed -- is a long-term project. At 6-foot-9, Bonga played point guard in Germany, and the Lakers are intrigued by his combination of size, length and ballhandling ability. But Bonga is a non-shooter at this point, and his decision-making must improve with experience.

Unlike the past few summers, the Lakers' regular-season roster won't have a strong resemblance to the one we see in Vegas this year. Nonetheless, a handful of contributors might be able to translate what they've done in the NBA Summer League come this fall.-- Kevin Pelton

Next matchup to watch: July 11

Atlanta'sTrae Young matches up with Indiana'sAaron Holiday in a battle of two of the top point guards in college basketball this past season. Both undersized guards have been scoring prolifically during summer league so far, even if they've struggled with efficiency at times.

Second-year player John Collins has been dominant at times for the Hawks, dunking emphatically on the competition while showing encouraging progress with his 3-point shot, hitting 5-of-10 attempts thus far. And Indiana second-round pick Alize Johnson has brought tremendous energy. He probably will play a major role in slowing down Atlanta's big men in this opening matchup of summer league's single elimination tournament. -- Jonathan Givony

Wagner twists ankle, hobbles off court
Lakers rookie Moe Wagner tries to work off a screen and twists his ankle on a defender's shoe. Wagner would limp to the sideline.