Which player had the best sneakers of Week 22 in the NBA? 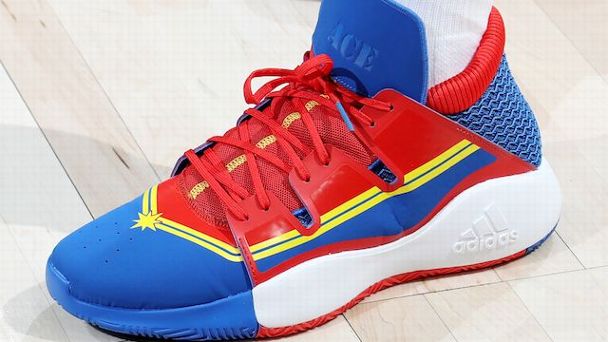 Building off of the momentum of last week's International Women's Day, Utah Jazz shooting guard Donovan Mitchell helped debut the first edition of Adidas' upcoming collaboration pack with Marvel Studios over the weekend, made to celebrate the career and achievements of longtime WNBA star Candace Parker.

Created in tandem with the animation and comics juggernaut in advance of the release of "Captain Marvel," the studio's first female-led superhero film, the sneaker features blue, red and yellow hues and design elements from the character's suit, along with Parker's longtime "Ace" nickname.

The MVP, Olympic gold medalist and NCAA champion -- two times each -- has been the face of Adidas basketball in the WNBA since signing with the brand in 2008.

While Mitchell, James Harden, Damian Lillard and others are expected to have their own Marvel-inspired sneakers unveiled in the coming weeks, it's no small feat that Parker's pair headlines and debuts the layered collection. Parker later revealed the shoes and their custom packaging in an Instagram post.

Themed sneakers have long been commonplace around the league, as have players hand-writing messages of inspiration and support. For Philadelphia 76ers point guard and Australia native Ben Simmons, the inscription along his Nike Hyperdunk X sneakers over the weekend carried added meaning.

A simple "Pray For NZ" nod to Australia's neighboring country spoke volumes, as the region mourned the loss of 50 lives in the aftermath of a mass shooting in the city of Christchurch, New Zealand. Simmons also purposefully mismatched his usual home and away Hyperdunk pairs, wearing one white and one black sneaker on each foot, a take on Nike's "Equality" campaign in the wake of the racially charged tragedy.

"It's devastating. It's sad for those families," Simmons said after the game. "My dad isn't from Australia, but I grew up there, and I've been to New Zealand -- they are great people there."

Elsewhere in the league, Houston Rockets power forward PJ Tucker continued to pull out simply impossibly rare sneakers, somehow unearthing a brand-new pair of the "Dunkman" Nike LeBron 2 from 2005. With LeBron James passing Michael Jordan atop the NBA's all-time scoring ranks a week ago, his special edition sneakers for the game featuring his own silhouette-inspired "Dunkman" logo along the tongue was a fitting tribute to the Jumpman that caused a stir.

The pair strategically worn by Tucker was the first "Dunkman" sighting long ago. The white, gray and neon green exclusive originally made after James' second season in the league is believed to have been made in only a few dozen pairs. It was the first LeBron signature sneaker to incorporate the "Dunkman" logo, initially plainly traced from James' tomahawk dunk during his very first NBA game and later morphing in design.

With March Madness just around the corner, players have also been showing off their school pride as conference tournaments began this week. Los Angeles Lakers power forward Moritz Wagner was seen repping his Michigan Wolverines with a team exclusive colorway of the Air Jordan 33, complete with a Jumpman logo along the right tongue, and the school's bold "M" logo atop the left tongue. Tucker showed off his love for the Longhorns yet again, with a University of Texas exclusive edition of Kevin Durant's KD 4 in burnt orange, originally made in 2011 for the basketball team.

Boston Celtics point guard Kyrie Irving also took advantage of the league's loosened color rules and flexed the many collegiate editions made of his latest Nike Kyrie 5 signature model. After wearing a home colorway made for his Duke Blue Devils and the UConn Huskies, Irving was seen donning a Ducks-exclusive pair made for the University of Oregon in a clean black and yellow colorway.

Featuring a wing graphic along the midsole and the school's "O" icon along the heel, the Ducks carried the momentum into the weekend, overachieving as a 6-seed and convincingly winning the Pac-12 championship to punch their ticket to the NCAA tournament.