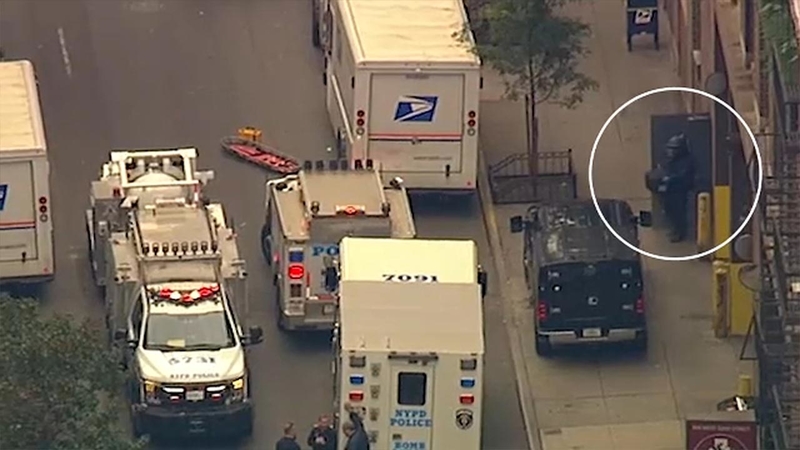 MIDTOWN MANHATTAN -- The NYPD's bomb unit safely removed a suspicious package from a Manhattan postal facility, one of four devices found Friday in the expanding mail-bomb scare that has targeted prominent Democrats and other critics of President Donald Trump.

Police responded just after 8:30 a.m. to the post office on West 52nd Street, where a package resembling the other pipe bombs was addressed to former National Intelligence Director James Clapper at CNN's address in Columbus Circle.

The Department of Justice confirmed that one person was taken into in custody in Florida in connection with the incidents.

Law enforcement sources identified the man as 56-year-old Cesar Sayoc, of Aventura, Florida, who was taken into custody at an auto parts store in the nearby city of Plantation.

He was born in Brooklyn and attended college in North Carolina before moving to the Miami suburbs in the late 1980s. He is an amateur body builder and businessman whose online resume describes him as a promoter and booking agent for male stripper and burlesque shows.

He reportedly has a criminal history, with court records in Florida showing that Sayoc was arrested in 2002 and served a year of probation for a felony charge of threatening to throw or place a bomb.

RELATED: What we know about pipe bomb suspect Cesar Sayoc

Attorney General Jeff Sessions said Sayoc is currently charged with five federal crimes and faces up to 58 years in prison, though he left the door open for additional charges. He will be charged in federal court in Manhattan after an initial court appearance in Florida, as five of the improvised devices were recovered in the Southern District of New York.

The second package recovered Friday was addressed to New Jersey Senator Cory Booker and was discovered as found at a facility in Florida, while two others were intercepted in California that were addressed to Sen. Kamala Harris in Sacramento and billionaire liberal activist and fundraiser Tom Steyer in Burlingame.

Who are the targets of the suspected pipe bomb packages

West 52nd Street was closed to vehicle and pedestrian traffic between 8th and 9th avenues as investigators descended on the facility.

Out of an abundance of caution, students at P35M were moved to a nearby location. John Jay College, which is also in the area, remained open.

Shortly after 10 a.m., bomb experts emerged with the package and placed it in the NYPD's bomb disposal vehicle. Police then escorted the vehicle out of the area.

Investigators were analyzing the innards of the crude devices to reveal whether they were intended to detonate or simply sow fear just before Election Day.

Details suggested a pattern -- that the items were packaged in manila envelopes, addressed to prominent Trump critics and carried U.S. postage stamps. The devices were being examined by technicians at the FBI's forensic lab in Quantico, Virginia.

Watch the FBI's statement on a suspicious package discovered at a post office in Midtown Mahattan.