Introduction to Theater: 1,500 NYC students see 'The Lion King' on Broadway for free 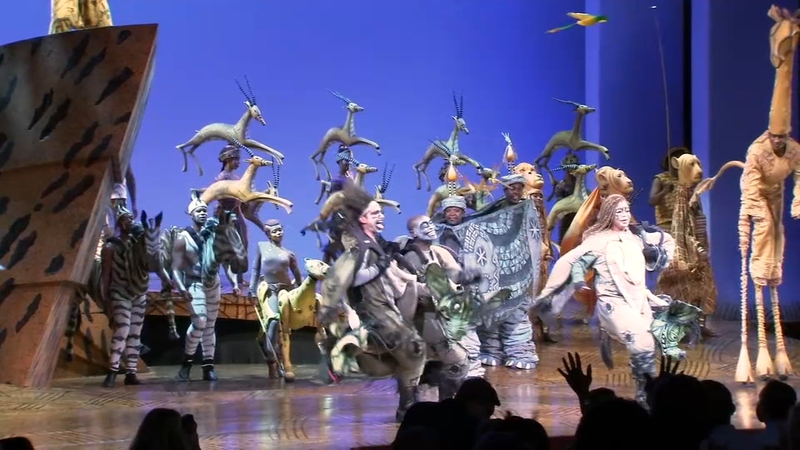 Introduction to Theater: 1,500 students see 'The Lion King' for free

NEW YORK CITY -- Roughly 1,500 students and their teachers from New York City public schools saw "The Lion King" on Broadway for free Wednesday, part of a long-running program that had to be suspended for two years due to the COVID pandemic.

But now that Broadway is back in business, so is Disney and the Theatre Development Fund's Introduction to Theatre program.

Their enthusiasm was obvious, the energy level high, and it was buzzing outside the Minsikoff Theater on 45th Street as the youth of the city exited following nearly three hours of free entertainment.

It's enough to reaffirm your faith in the power of live theater: Experiencing Disney's "The Lion King" in all of its wonder through the eyes of teenagers.

"I was just utterly shocked," one said. "I didn't expect Broadway to be this great."

The Theatre Development Fund, or TDF, is the non-profit organization most famous for its Times Square TKTS booth that offers discount tickets, but the group also finds other ways to make Broadway shows available to as many as possible.

"The thing I missed the most during the pandemic and that I'm the most looking forward to is being back in the theater with 1,500 students when they go to their very first Broadway show," TDF Executive Director Victoria Bailey said.

The long-running show the students saw is an ideal way to discover the magic of Broadway, says one of the teachers who brought them.

"These students were up on Disney," she said. "They have seen 'The Lion King.' They love 'The Lion King.' So what better way to introduce them to theater than to take them to a show that they already love and see actors bring it to life on stage in real time."

"We literally plant dreams," he said. "Dreams in their head of fantasy, but also dreams of possibilities."

Sandy Kenyon reports on the latest streaming sensation, "No Exit," a new thriller streaming on Hulu.

And by offering "The Lion King" for free, all involved are getting the next generation of theatergoers excited about the Great White Way.

"It blew me out of the water," one said. "It was really cool to see it all so close to you, and it's live, so it's not like if they mess up they can just redo it."

"The Lion King' is from Disney, owned by the same parent company as this ABC station.