One of the derailed cars carrying hydrochloric acid, a chemical that can be harmful to humans, leaked as the train came to a crashing halt.
KFSN
By ABC30.Com Staff 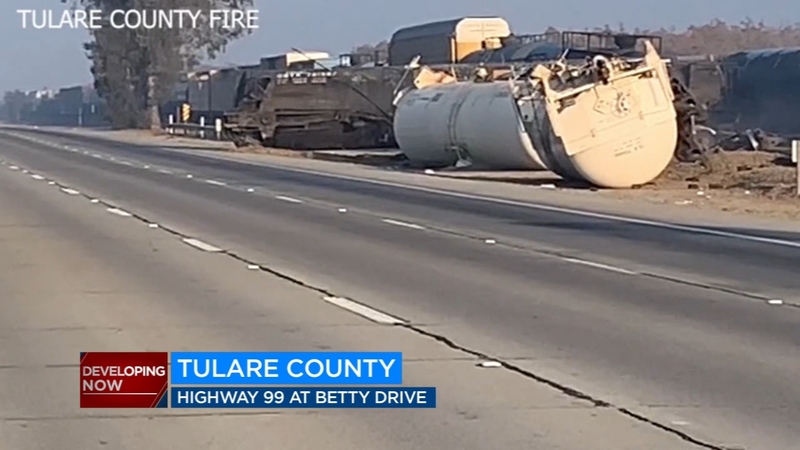 FRESNO, Calif. (KFSN) -- California Highway Patrol officers have reopened two of the three northbound lanes on Highway 99 in Tulare County, more than 24 hours after a train derailment shut down the highway.

TULARE COUNTY, Update: Two lanes of Northbound 99 are now open. The full closure needed was completed during the overnight hours. We will provide a final update once Northbound 99 has been fully re-opened.

The derailment happened just before 7 am on Monday, closing a 10-mile stretch of the highway in Goshen for hours.

Crews worked through the night to repair the wreckage left behind after the Union Pacific train derailed, spilling toxic chemicals near Goshen.

Union Pacific officials said six tank cars derailed. One carrying hydrochloric acid, a chemical that can be harmful to humans, leaked as the train came to a crashing halt.

Early Tuesday morning, officials had removed all the overturned cars, and were working to repair the rails.

On Monday night, all three southbound lanes and one northbound lane had reopened to drivers. Travelers inched their way along Highway 99 in Tulare County more than 12 hours after the accident.

By Tuesday morning, a second northbound lane was opened.

The California Highway Patrol had more people on patrol as part of the heavily used freeway heading north is still closed off, and dozens of local and state agencies remain at the crash site.

CHP officials said there were no longer any leaks, and the air quality was good and stable.

Traffic was moving slowly heading north up Highway 99 from Tulare County on Monday night, more than 15 hours after a train derailment shut down the highway.

Railroad officials said they hope to have the highway fully reopen by the end of Tuesday.

The cause of the derailment is still under investigation.