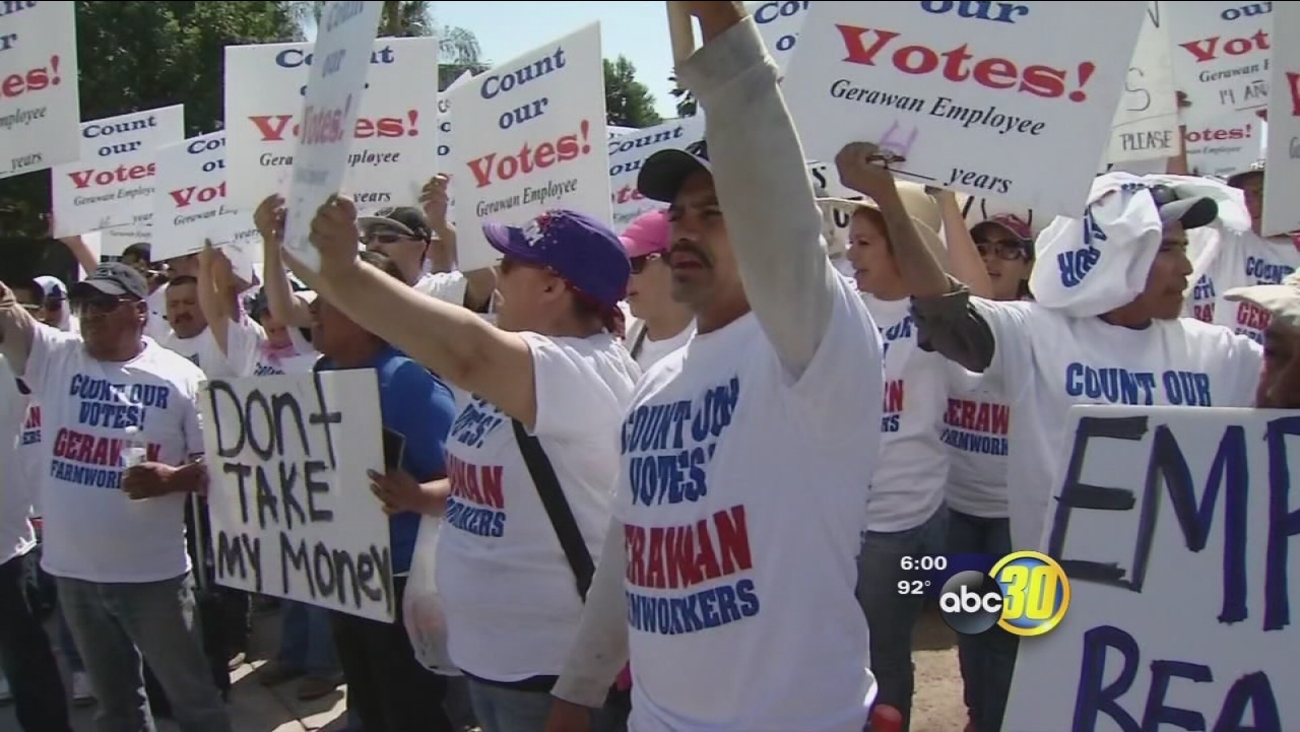 Hundreds of farmworkers who work for Gerawan Farming in the Central Valley protested in Visalia. They are upset that their votes on joining a union aren't being counted. (KFSN)

SAN FRANCISCO -- The California Supreme Court handed a victory to organized farm labor Monday in a lawsuit that pitted the union launched by iconic labor leader Cesar Chavez against one of the largest U.S. fruit farms.

In a unanimous ruling, the high court in the nation's leading agricultural state upheld a law that aims to get labor contracts for farmworkers whose unions and employers do not agree on wages and other working conditions.

The decision maintains the power of farmworker unions by ensuring contracts that guarantee wages, hours, vacation time and other terms that could otherwise be decided by employers. The California justices said the 2002 law did not violate the state Constitution.

Labor activists said the law is key to helping farmworkers improve working conditions by preventing employers from stalling contract talks with unions to avoid a deal. If there is an impasse, the mediator can impose a labor contract on the employer.

Opponents called the law government overreach that deprived agricultural employers and workers of any say over the terms of employment.

The law allows the California Agricultural Labor Relations Board to order mediation to achieve a contract and gives mediators the authority to set the terms of the agreement if there is a stalemate.

Unions can seek mediation 90 days after demanding to bargain on behalf of workers - even if the vote to unionize occurred decades earlier in some cases.

"The argument when it was enacted was that workers would get all fired up about having a union to represent them, and they would vote for the union, but then the employer would delay, and the workers would lose their enthusiasm," said Philip Martin, a farm labor expert at the University of California, Davis.

In court documents, the United Farm Workers of America, co-founded by Chavez, said a previous law had failed to achieve California's goal of providing millions of farmworkers the right to collective bargaining.

When the law was enacted in 2002, fewer than half of farm employers whose workers voted to join a union since 1975 had agreed to a labor contract, according to the UFW.

The union won the right to represent workers of Gerawan Farming in 1990, but the sides did not agree to a contract. At UFW's request, the California agricultural relations board in 2013 ordered Gerawan and the union to enter mediation, and the mediator eventually crafted a contract that was approved by the board.

An appeals court ruled two years ago that the law was unconstitutional because it failed to provide mediators with any policy goals or standards and would result in a different set of rules for different employers.