By MATT KRUPNICK -- The Hechinger Report 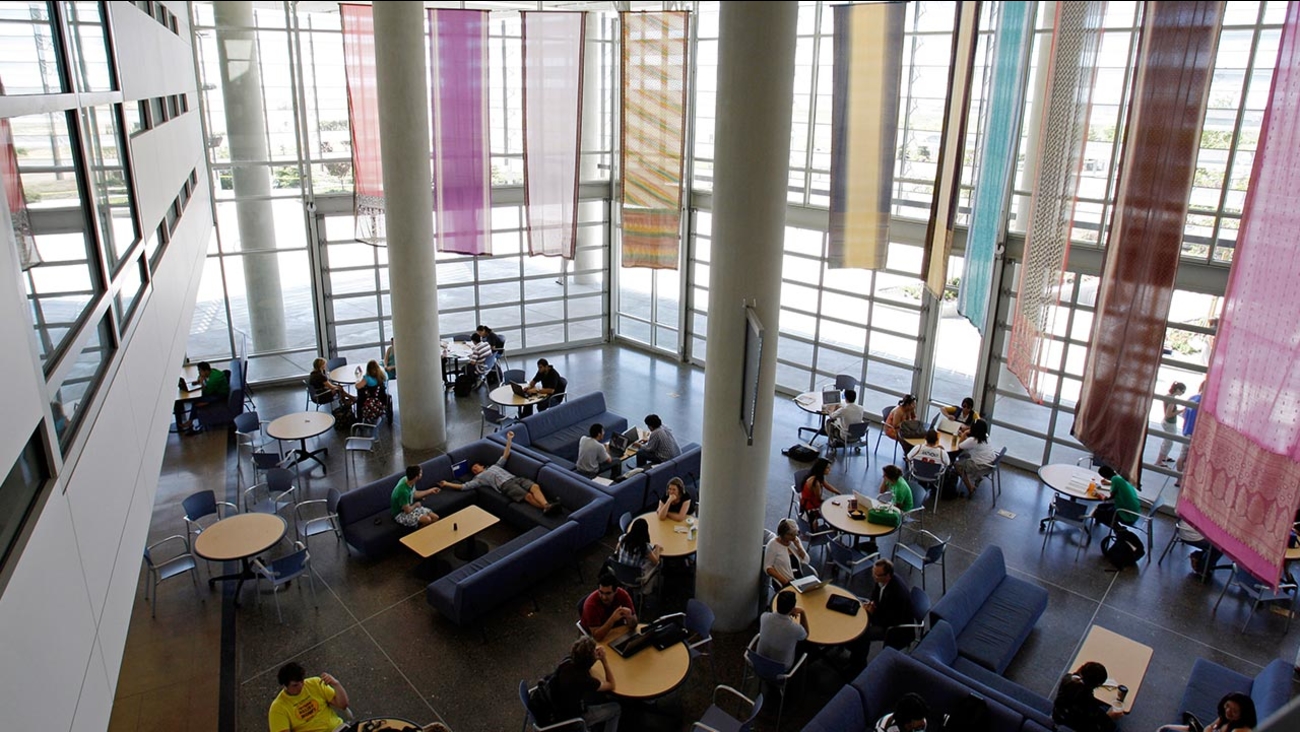 Merced students lounge in the 'lantern', a meeting place at the heart of campus in Merced, Calif., Monday, April 20, 2009. (AP Photo/Ben Margot)

MERCED, Calif. -- A decade has passed since America's newest research university opened amid farmland in central California. And surprisingly little on the landscape has changed.

Cows still graze alongside the University of California, Merced. There's no student union, and some researchers are based miles away at a former Air Force base.

Pushed by politicians who represented the San Joaquin Valley in California's farm-dominated heartland, the university is one of several public campuses that have opened in states like Florida and Arizona only to face deep cuts in higher-education budgets.

The campus - which differs from most other new campuses in its focus on graduate degrees and research - was meant to add college degrees and economic growth to an area that needed both, but it has developed more slowly than planned as more students have turned to online courses and state funds have dried up.

Construction of the university, which broke ground in 2002, began as dramatically rising construction costs collided with massive reductions in state higher education spending following the 2008 economic downturn. By 2010, California was spending $1.6 billion less on higher education than it did a decade earlier, according to the Public Policy Institute of California.

Originally envisioned to have 20,000 students by 2020, Merced had 6,268 graduate and undergraduate students in 2014-15 as budget problems slowed construction and pinched the school's capacity to enroll more. By 2020, the university anticipates enrolling about half the number it originally expected.

And it hasn't yet spun off the promised economic revitalization in an area hit hard by recession and drought.

Merced's experience should be a warning, said Henry Eyring, co-author of "The Innovative University: Changing the DNA of Higher Education from the Inside Out" and academic vice president at Brigham Young University's Idaho campus. As much as politicians like to cut ribbons in front of new campuses, he said, traditional colleges have become much more expensive than online courses and other new means of delivering education.

"You have to ask, 'Is this truly essential?'" he said. "You have to look very closely at every dollar invested into brick and mortar."

Campus leaders say UC Merced is doing exactly what it was meant to do: bring higher education to a region that doesn't have enough of it.

Only 13.5 percent of Merced County residents 25 or older have at least a bachelor's degree, according to the Census Bureau, far lower than the state's 30.7 percent.

But only about a third of UC Merced's 5,900 or so undergraduates are from the San Joaquin Valley.

"These students by and large are grateful for the opportunity to be here," said Dorothy Leland, who became the university's third chancellor in 2011.

The University of California began planning its 10th campus in 1988. After lobbying from politicians, regents in 1995 chose Merced, an isolated city of 81,000 between Fresno and Modesto near the Sierra Nevada foothills.

University leaders in July pitched expansion plans to the UC Board of Regents, but some board members said they were skeptical about using state funds to finance more construction.

Even as the university struggles to finish its campus, some have called on UC Merced to do more for the 450-mile-long Central Valley, an area with 6.5 million residents that includes the San Joaquin Valley. Poverty and school attendance in the region still need improvement, said Ben Duran, a former president of Merced College, a community college.

UC Merced should focus on teaching but is trying to reach the more prestigious heights of research universities, said Duran, who now leads the Great Valley Center, which promotes economic, educational and social growth.

"Ten years later, it's become more of a traditional UC campus than what we had hoped for," Duran said. "We haven't seen the kind of outreach and marketing to kids in the Central Valley as we would like."

Financial realities have made it difficult for UC Merced to balance its missions, Leland said.

"The thought was the campus would grow up the same way as other campuses," Leland she said. "But in the interim, there were sea changes in the way public universities are funded."

The university has appealed for time. A decade is far too little time to judge the campus, said Janet Napolitano, president of the UC system and a former U.S. Homeland Security secretary and Arizona governor. She cited 50-year-old UC Irvine as an example.

"UC Irvine 50 years ago was a pile of dirt," she said. "Now it's a center of bioengineering and other disciplines in Orange County. There's a whole cluster or companies around there."