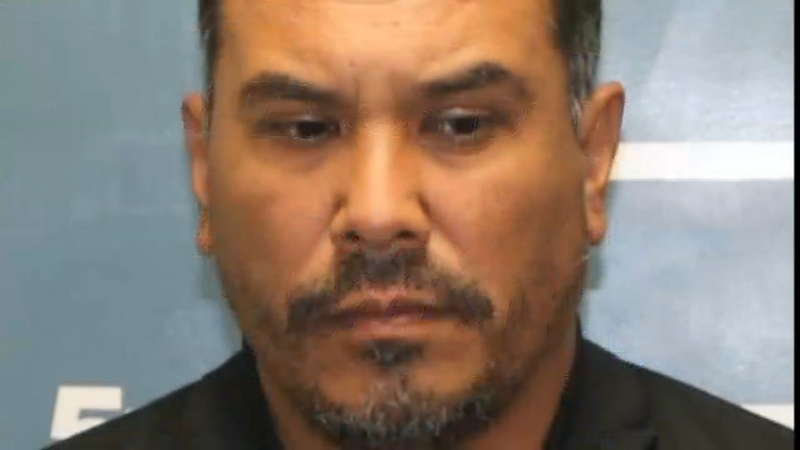 VISALIA, Calif. (KFSN) -- A Visalia security guard has been arrested after allegedly using excessive force while performing a citizen's arrest on the job.

In October of this year, Peter Micheal Jaramillo was employed by a security company to patrol shopping centers along the South Mooney corridor.

Police say it was around this time that they learned Jaramillo allegedly used excessive force while making a citizen's arrest while performing his duties as a security officer.

On October 29, Jaramillo told Visalia Police he was trying to make a citizen's arrest on a man for trespassing at Burlington Coat Factory when the man attacked him.

They had information the security guard may have had a history of getting overly physical with people on the job.

"We were just contacted by one of the (Visalia Police) commercial officers who works that area and said, 'Hey, make sure you take a look at this arrest'," Visalia Police Sgt. Gary Williams said.

In a statement of probable cause to request an arrest warrant, a Visalia Police officer writes that video evidence showed that Peter Jaramillo attacked the man, grabbing him by the throat, slamming him to the floor.

The man hit his head on a shopping cart and on the floor.

"We obtained some security footage from the business in the area along with the body-worn camera of the security guard," Williams said. "We forwarded that information along with a report, an investigation that we conducted, to the district attorney's office. They filed a warrant on the subject and he was arrested and booked."

Charges were never filed against the man Jaramillo allegedly assaulted, so he was released from custody.

Jaramillo, meanwhile, faces more than four years in prison, after the DA's office charged him with assault and false imprisonment.

Records show California's Bureau of Security and Investigative Services revoked Jaramillo's firearm permit license in 2017 after it received a notice from the Department of Justice that Jaramillo wasn't allowed to possess a firearm.

It's unclear why, but Jaramillo reapplied for a firearm permit license in 2018, and the BSIS reissued the license after getting the all-clear from the DoJ.

Jaramillo has been charged with seven crimes in Kern County since 2016, but for unknown reasons, all of those cases were dismissed.

Contrary to what Jaramillo claimed in this case, police say the man he assaulted was never told to leave, nor did police find any formal trespassing records for the property.

Action News has reached out to AEGIS Security & Investigations, Jaramillo's employer, but hasn't heard back yet.

"Jaramillo's license with BSIS at the moment is current and valid," said Department of Consumer Affairs Spokesperson Ben Deci. "However, we are aware of the charges that have been filed against him and will determine what actions, if any, are appropriate to protect California consumers."
Report a correction or typo
Related topics:
visaliaarrestcrimeassaultsecurity
Copyright © 2022 KFSN-TV. All Rights Reserved.
CRIME
Body of Missy Hernandez recovered from aqueduct near Huron
Man arrested for murder of missing Fresno woman, Missy Hernandez
Everything to know about Gov. Newsom's 2022 budget plan
Detectives, friends still looking for Fresno woman missing for 1 month
TOP STORIES
Man pleads not guilty to murdering brother-in-law on Christmas Eve
Some Valley hospitals postpone 'elective' surgeries due to COVID surge
Man who admitted killing dog to Fresno police facing more accusations
Man charged with murder of 2-year-old whose father died a year earlier
24-year-old man shot in central Fresno, police say
43-year-old man stabbed in northwest Fresno, police say
How reliable are rapid tests? Dr. explains when to depend on results
Show More
Is there home appraisal bias in Fresno? Professionals weigh in
Housing Watch: Million-dollar homes at Ventana Hills in Fresno County
Good Sports: Fresno woman gains recognition with indoor rowing
Valley ag business continues to feel impact of supply chain issues
Family of 5 displaced after house fire in southwest Fresno
More TOP STORIES News