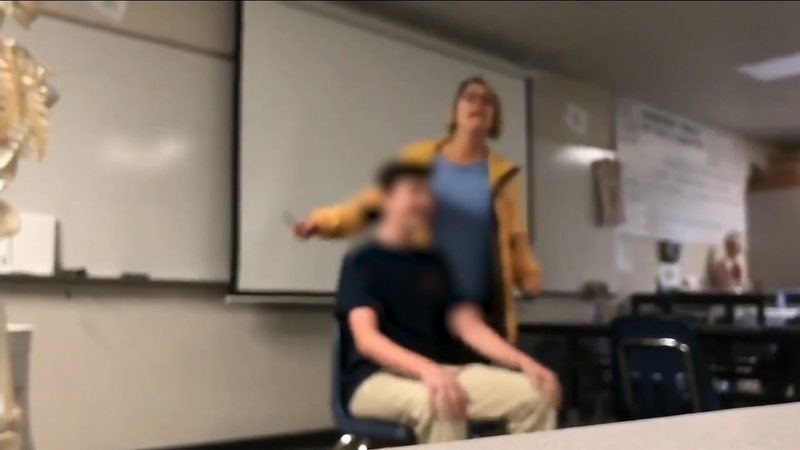 FRESNO, Calif. (KFSN) -- The sister of the teacher seen in this video singing the Star Spangled Banner while chasing her students around with scissors is speaking out.

Elizabeth Erngren says her sister, 52-year old Margaret Gieszinger, has willingly checked herself into a hospital and is seeking a psychological evaluation.

Gieszinger was sent to jail and charged with six misdemeanors - including one for appearing to forcibly cut the hair of one of her high school students.

"She's very ashamed and remorseful for her behavior - let's be clear -there's no tragedy - yes, she had scissors but she didn't hurt anybody," Erngren said.

According to state records, Gieszinger's teaching credentials have been suspended twice in the past, though the reasons why have not been made public. Her family says she's experienced situations before exemplifying her past mental health.

"She has had outburst of bizarre behavior since she was a little girl. It wasn't so surprising really. It was just shocking that this video had gone viral," Erngren said.

According to a police report, days before the scissors incident the school received complaints from students and a parent about her actions toward getting students to not use their cellphones in class. The principal, who said he talked to Gieszinger before class that day, said she "appeared a bit anxious that morning but nothing that caused him any concern."

When questioned by police, Gieszinger told them she brought scissors to her class to give a foreign exchange student - who was living with her family - a hair cut.

In the report she states he had "been acting like a ding-dong."

Her family now hopes she's getting the help they say she's needed for so long.