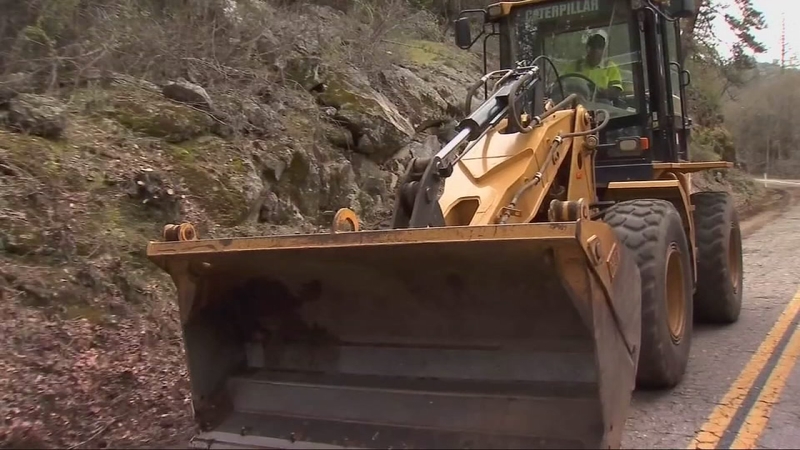 MARIPOSA, Calif. (KFSN) -- With rain is expected to pour down on Mariposa County this week, crews spent most of the day Tuesday working to make sure trees and mud don't come down with it.

Many are concerned this could be the wettest storm the area has seen since the Detwiler Fire.

Mariposa County Public Works Director Mike Healy explains, "If we do get some high winds, we generally get some trees falling, especially after the Detwiler Fire. Trees that are weakened by the fire, or even last February's storms. It's been a perfect mix of bad conditions."

Public Works crews cut down some of those dangerous trees on Tuesday.

They've also laid more than 50,000 feet of protection along hillsides throughout Mariposa County.

People who live near the burn scars are also getting their own homes prepared.

Jessica Sarnoff tells us what her family has done to prepare, "Towels by our door to help keep massive amounts of water from pouring in, (plugging in) a manual water pump outside."

Sarnoff says the county recently came and repaired the drainage system along the area, however, the runoff is still a concern.

"There have been some rocks coming down, and I've seen mud starting, so I'm getting a little worried because I don't drive a 4 wheel drive car."

Past rains have already caused some problems. The Mariposa County Sheriff's Office responded recently to a mudslide near Bear Valley Road and the Bagby Bridge.

With a storm heading their way, they expect it to happen again

Caltrans has re-opened that road. Officials say they've hired a contractor to evaluate slopes impacted by the fire and work on them to prevent future disasters.