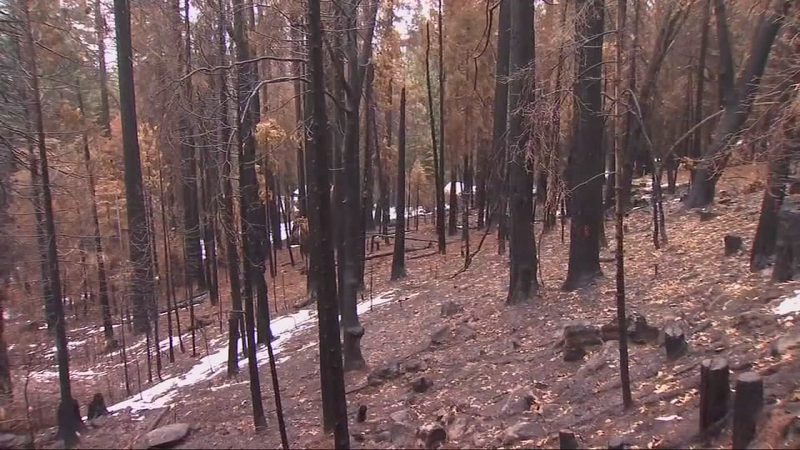 Crews across Central Calfornia on Wednesday said they are ready to respond to flash floods or rockslides in burn-scarred areas.

A winter storm is making it's way through the Madera County foothills, bringing a rush of concern to the locals who live along some old burn scars.

Anything that attracts water and holds it back, like root systems, are completely wiped out," said Ronald Davies, the Maintenence Supervisor at the Narrow Gauge Inn. "We have a little volcano over here, a wasteland, so when it gets so saturated, its going to bring mud with it."

The Narrow Gauge Inn is steps away from some of the land scorched by the Railroad Fire.

Past rains have already clogged up some of the nearby drains, so Davies has been working to clear what he can while keeping his eye on what could come rushing down.

"We have someone that stays 24 hours here 24/7 on duty. They're looking around. We're pretty prepared, so lets see what happens," said Davies.

The rain is now creating streams along hillsides. With more water expected and flash floods possible, local agencies are teaming up.

Lt. Craig Hinch of the California Highway Patrol explains what his agency is doing, "Patrolling and working with Caltrans as well as county roads to ensure there are no mudslides, rockslides, and downed trees, just trying to keep the speeds down.

The winter mix already causing problems for drivers like Sarah Rosales, "We have a lot more branches and trees falling, a lot more debris coming into the road...so it gets a little more hazardous, especially with all the snow we're getting so much every week."

So far, officers haven't received any major calls for service. All that many locals can do now is wait, and hope that old scars don't bring a new disaster.

Crews across Central Calfornia on Wednesday said they are ready to respond to flash floods or rockslides in burn-scarred areas.

During this storm, Caltrans says their crews are ready to respond to any hazard on Highway 190 east of Springville.

It's where the Pier Fire burned last August and September.

The National Weather Service says burn scars, such as those left by the Pier Fire, are at a greater risk of flash flooding.

Wednesday afternoon, Caltrans crews were in the Tule River Canyon, working quickly to clear Highway 190 of dirt and debris, ahead of another storm that could cause flash flooding, and rock or mudslides.

Flooding temporarily closed one stretch of the road last week.

"It is an area of concern for them so they're keeping a very close eye on it," said Caltrans District 6 Public Information Officer Christian Lukens.

Ashley Clark also kept a close eye on weather conditions Wednesday, as she made her way down the mountain with her daughter.

They went to see the snow.

"It was raining really hard up there, so I wanted to get out before it started snowing," Clark said.

The Porterville California Highway Patrol is reminding drivers to be cautious and aware of the potential for flash floods and mudslides in the area.

Caltrans also advises drivers to give themselves extra time in case something happens.