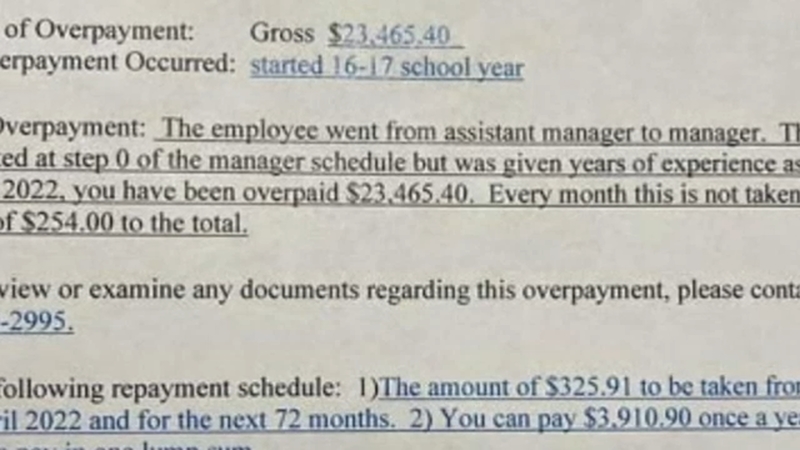 A payroll mistake has left consequences for some Alabama school workers. Their employer overpaid them for years, and no one knew.

But now, the school district wants its money back.

Christie Payne is a lunch-room manager at a high school in the state.

She received a letter from her boss saying her employer had accidentally been overpaying her over the last six years, and now she owes them more than $23,000.

Somehow when she was promoted years ago, she was given a salary meant for someone with more experience.

At least two other employees have come forward, saying they got similar letters.

Many incoming students took to Reddit to express their frustration and voice concerns about how Claremont McKenna College handled the situation.

The Chilton County Board of Education website said under the law, board officials are required to recoup any over-payments.

But legal experts said the school workers might not have to return the money, especially given how long it's been.

"You can run into problems with federal wage law for taking away money that's been paid to them," said Heather Leonard, a labor and employment attorney. "The longer it's been paid, the more likely it is these employees are going to have a stronger argument that they're entitled to keep the money."

The employees were given three ways to pay back the money. They can pay a lump sum, a yearly payment of nearly $4,000 for the next several years or have $325 taken out of their paycheck for the next six years.

The letter also threatens to add more money to the total each month the matter goes unresolved.