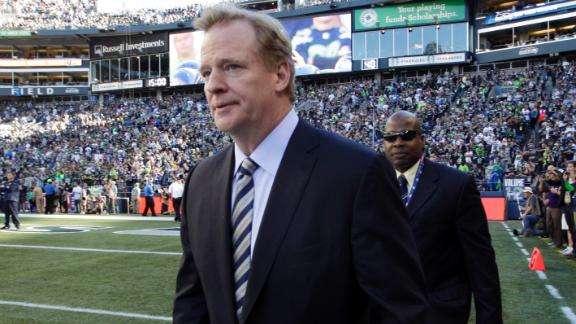 NFLPA executive director DeMaurice Smith said Wednesday that the union has yet to be formally apprised of Ray Rice's indefinite suspension and questioned why the former Ravens running back could be suspended indefinitely when the course of action isn't an option under the league's revamped domestic violence policy.

"I would have expected the letter to be delivered earlier," Smith told ESPN, "but we're awaiting the delivery of the letter."

The NFLPA said that such a letter from the league is typically received within one business day. On Monday, TMZ Sports released video showing Rice punching Janay Rice, at the time his fiancee, twice in the face in a hotel elevator in Atlantic City last February. Rice was put on indefinite suspension by commissioner Roger Goodell on Monday, shortly after the Ravens terminated his contract upon release of the video.

"The first step in that disciplinary process would be be that delivery of that letter indicating the basis for discipline," Smith said, "and that hasn't occurred yet."

The NFL has the authority to unilaterally assign penalties based on its personal conduct policy, but the collective bargaining agreement stipulates the process for informing players of imposed discipline. Once the NFLPA receives a letter, it can decide whether or not to appeal a punishment. Smith said Wednesday he would wait to see the basis for Rice's suspension -- assuming the league provides it -- and consult with Rice before deciding what to do next.

After a loud and sustained public backlash over the initial two-game penalty for Rice, the NFL called experts on domestic violence to its Park Avenue offices and listened.

On Aug. 28, the league announced a new and comprehensive policy for penalties for domestic violence. Starting immediately, a first-time offender would receive a six-game suspension, with extenuating facts possibly increasing the number of games. Second offenses would mean a lifetime ban from the league, although a player would be able to apply for reinstatement after one year.

Is Roger Goodell In Trouble?
Chris Mortensen breaks down the potential ramifications for Roger Goodell and the NFL in reaction to the news that a law enforcement official said the recently surfaced video of Ray Rice hitting his then-fiance was sent to the NFL in April.
Related topics:
sportsespnray ricenflbaltimore ravensdemaurice smith
Copyright © 2020 ESPN Internet Ventures. All rights reserved.
More Videos
From CNN Newsource affiliates
TOP STORIES