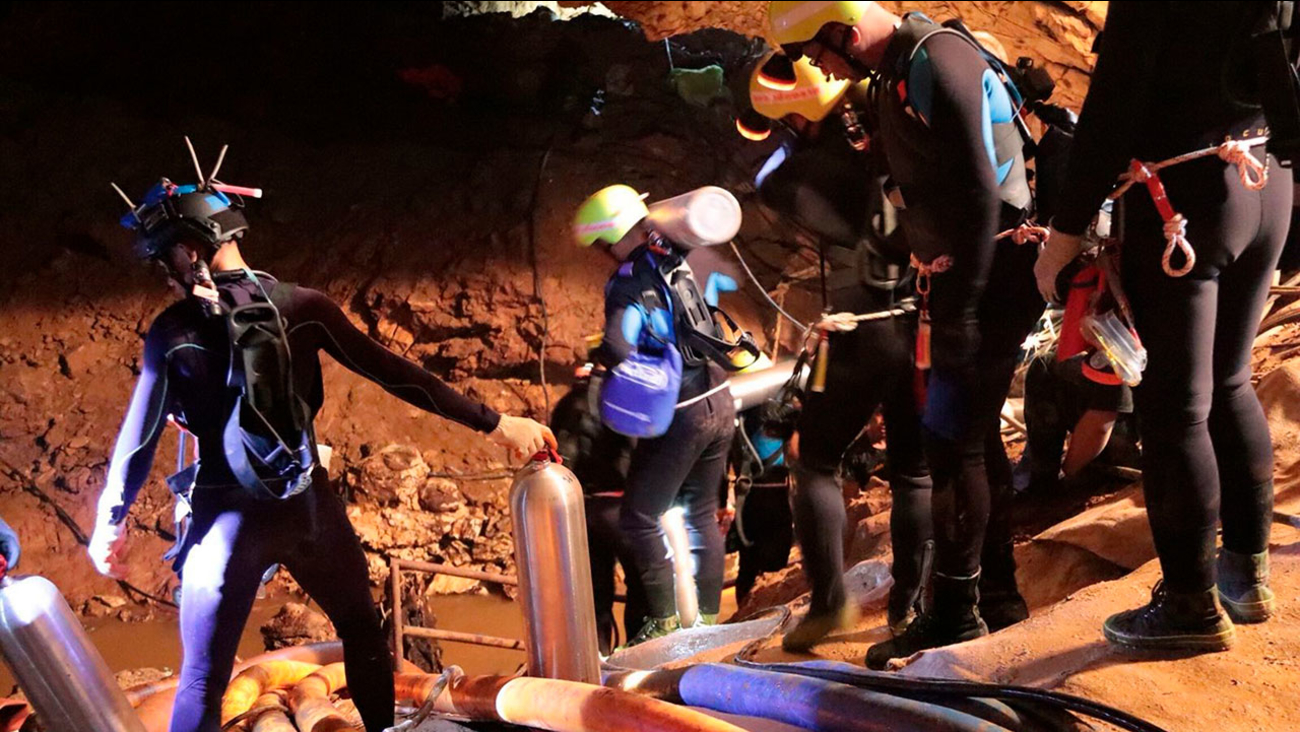 MAE SAI, Thailand -- (KFSN) -- Rescuers in northern Thailand on Sunday extracted at least four members of a youth soccer team from the cave where they had been trapped for more than two weeks, part of an ongoing operation to rescue the 12 boys and their coach, officials said.

The operation to rescue the boys, ages 11-16, and their 25-year-old coach by having them dive out of the flooded cave began Sunday morning, with expert divers entering the sprawling complex for the complicated and dangerous mission.

Shortly before 8 p.m., the Thai navy SEALs reported on their official Facebook page that four had been rescued.

Helicopters and several ambulances were seen departing from the cave area, though there was no official announcement of whom they were carrying. Officials had said earlier that helicopters were on standby to take anyone rescued from Tham Luang Nang Non cave in Chiang Rai province to a hospital.

Chiang Rai acting Gov. Narongsak Osatanakorn, who is heading the operation, said that 13 foreign and five Thai divers were taking part in the rescue and that two divers would accompany each boy as they're gradually extracted.

"Divers will work with doctors in the cave to examine each the kids' health to determine who should get to come out first," Narongsak said Sunday morning.

The entire operation to rescue all 13 could last two to four days, depending on weather and water conditions, said army Maj. Gen. Chalongchai Chaiyakam.

The only way to bring the boys and their coach out of the cave is by navigating dark and tight passageways filled with muddy water and strong currents, as well as oxygen-depleted air. A former Thai navy SEAL passed out and died making the dive Friday.

Experienced cave rescue experts consider an underwater escape a last resort, especially with people untrained in diving, as the boys are. The path out is considered especially complicated because of twists and turns in narrow flooded passages.

But Narongsak said earlier that mild weather and falling water levels over the last few days had created optimal conditions for an underwater evacuation that won't last if it rains again.

Before announcing that the rescue was underway, authorities ordered the throngs of media that have gathered at the cave from around the world to leave.

The boys and their coach became stranded when they went exploring in the cave after a practice game June 23. Monsoon flooding cut off their escape and prevented rescuers from finding them for almost 10 days.

The ordeal has riveted Thailand and made global headlines, and the search and rescue operation has involved international experts and rescuers.

President Donald Trump said in a tweet on Sunday: "The U.S. is working very closely with the Government of Thailand to help get all of the children out of the cave and to safety. Very brave and talented people!"

Authorities had said that incoming monsoon rains that could send water levels in the cave rising, coupled with falling oxygen levels in the enclosed space, added to the urgency of getting those trapped out. Earlier efforts to pump out water from the cave have been set back every time there has been a heavy downpour.

Narongsak said Saturday that experts told him water from new rain could shrink the unflooded space where the boys are sheltering to just 10 square meters (108 square feet).

"I confirm that we are at war with water and time from the first day up to today," he said Saturday. "Finding the boys doesn't mean we've finished our mission. It is only a small battle we've won, but the war has not ended. The war ends when we win all three battles - the battles to search, rescue and send them home."

The boys sounded calm and reassuring in handwritten notes to their families that were made public Saturday. The notes were sent out with divers who made an 11-hour, back-and-forth journey to act as postmen.

One of the boys, identified as Tun, wrote: "Mom and Dad, please don't worry, I am fine. I've told Yod to get ready to take me out for fried chicken. With love."

"Don't be worried, I miss everyone. Grandpa, Uncle, Mom, Dad and siblings, I love you all. I'm happy being here inside, the navy SEALS have taken good care. Love you all," wrote Mick.

"Night loves Dad and Mom and brother, don't worry about me. Night loves you all," wrote Night, in the Thai manner of referring to one's self in the third person.

The most touching note came from one whose name was not clear: "I'm doing fine, but the air is a little cold, but don't worry. Although, don't forget to set up my birthday party."

Another, of indistinct origin, asked their teacher not to give them a lot of homework.

In a letter of his own, the coach, Ekapol Chanthawong, apologized to the boys' parents for the ordeal.

"To the parents of all the kids, right now the kids are all fine, the crew are taking good care. I promise I will care for the kids as best as possible. I want to say thanks for all the support and I want to apologize to the parents," he wrote.

An update Saturday from the Thai navy said three navy SEALs were with the boys and their coach, one a doctor. The 13 were having health evaluations and rehabilitation, and were being taught diving skills. Food, electrolyte drinks, drinking water, medicine and oxygen canisters have been delivered to them. A major concern of the rescuers is that oxygen levels in their safe space could fall dangerously low.