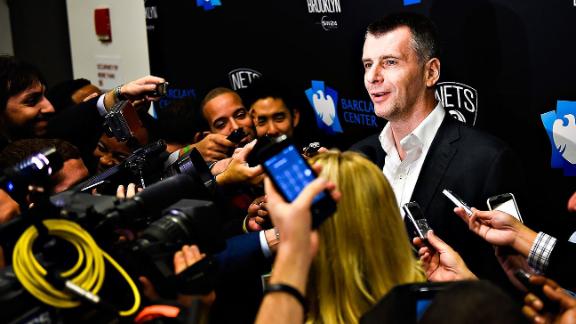 The Brooklyn Nets are available on the open market.

Russian billionaire Mikhail Prokhorov, five years into his failed championship pursuit as Nets owner, has made it known that the team is up for sale, according to league sources.

Sources on Tuesday confirmed a Bloomberg News report stating that Prokhorov has retained Evercore Partners to sell the franchise he acquired majority ownership of in May 2010 for $223 million.A league source said Evercore will gather bids potentially as soon as the end of the month.

Sources likewise confirmed a report from Bleacher Report that the struggling Russian economy is a factor.

"As we have said for many months, ownership is always open to listening to offers -- that's just good business," a representative for Prokhorov said in a statement. "There is nothing imminent in terms of a sale of any stake in the team."

Prokhorov's tenure as owner has been defined by his incredible willingness to spend a fortune to win and his bold claim that the Nets would win a championship in five years upon taking over. But sources have told ESPN.com that the Russian hasn't been thrilled with the team's financial losses or its performance on the court.