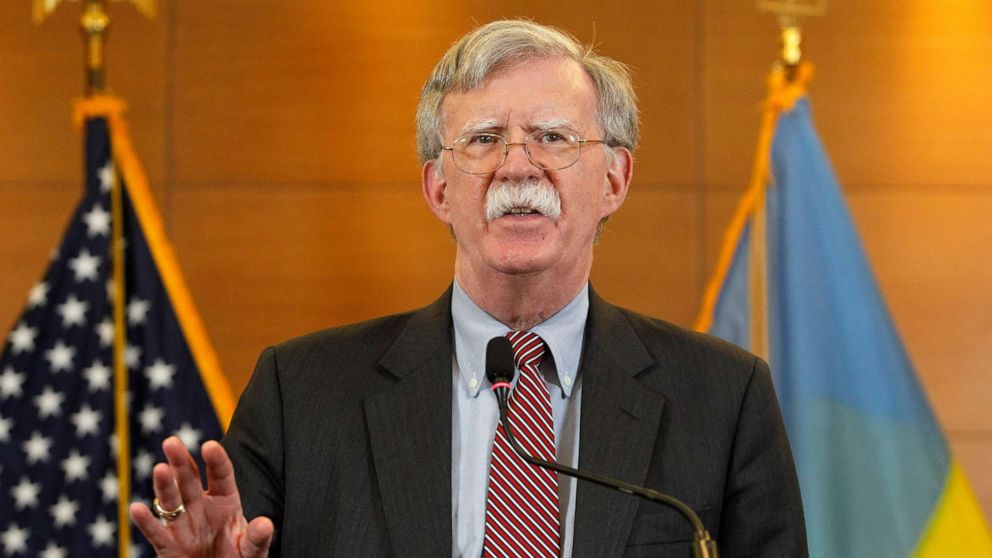 John Bolton is out as President Donald Trump's national security adviser after the two were not only at odds over foreign policy, but the terms of Bolton's exit.

Trump tweeted on Tuesday that it was his decision to fire his adviser, while Bolton claimed he made the decision to exit the White House, telling ABC News Chief White House Correspondent Jonathan Karl it was because of an "accumulation of things."

As Bolton disagreed with the president's approach toward Afghanistan, Iran, North Korea, and more, he found himself isolated in his role, according to Karl on "Start Here."

"These were not minor issues," he says. "These were, in some cases, the central initiatives of Trump on national security."

A suspected high-level Russian informant for the CIA may have been brought to the U.S. in 2017 because intel officials feared his identity was compromised, according to reports by CNN and the New York Times.

Russian media outlets on Tuesday claimed to have identified the former Russian official. The Kremlin confirmed the high-level employee worked in Russian President Vladimir Putin's administration, but downplayed reports that he was a spy, calling it "pulp fiction." ABC News has not confirmed the name of the alleged informant and is not reporting the name revealed by Russian media.

"I think when anything like this happens, when any spy story is told or out there, the intelligence agency will tell you it will be harder to recruit people," ABC News Chief Global Affairs Correspondent Martha Raddatz says.

Secretary of State Mike Pompeo, who was CIA director at the time of the suspected spy's extraction, called the reporting "materially inaccurate" on Tuesday.

The number of Americans without health insurance climbed by 2 million last year, according to new data from the U.S. Census Bureau, marking the report's first year-to-year jump since 2008 to 2009.

The survey comes as health care remains a key issue for many voters going into the 2020 presidential election and one of the Democratic primary's central policy debates, says ABC News Deputy Political Director MaryAlice Parks.

"You have some progressives in the race that have said that the fact that any American can go without health insurance to them is almost a moral question for the country," she tells the podcast.

ABC News and Univision are hosting the third Democratic debate in Houston, Texas on Thursday with the 10 highest polling candidates.

On Sept. 11, 2001, Lila Nordstorm was just three blocks away from the World Trade Center at Stuyvesant High School where she witnessed two planes hit the Twin Towers and both buildings collapse.

Less than a month after the attack, Nordstrom, then a 17-year-old senior, returned to school with her classmates.

"We were sent back into an environment that was not yet open to the public where the stench of the fires from Grand Zero was rampant," she says. "The area was engulfed in smoke for months while we were here...they were dumping World Trade Center debris right next to our school building."

Eighteen years later, Nordstrom is advocating for the thousands of students who were at the scene of the attack and the clean-up, some of whom are now suffering from respiratory illnesses and cancer, so they can get the health care and monitoring they need.

"These are all people that are at risk for or are currently suffering from a lot of the same conditions we're seeing in first responders," she says.

'He hit it and passed out': A Houston-area high school student fell ill after vaping and was rushed to the hospital on Monday evening.

'They could be anywhere in the U.S.': A murder suspect who escaped custody with his wife by overpowering a transport team has been added to the Unites States Marshals' 15 Most Wanted List.

'Public chastity': A female Iranian soccer fan who had been caught trying to enter the country's Azadi Stadium has died after setting herself on fire to protest her arrest.

'Lawlessness, injury and death': Nigeria will evacuate hundreds of its citizens from South Africa following a recent spate of violent attacks on foreign nationals living there

From our friends at FiveThirtyEight:

'Silver lining for Democrats': North Carolina played host to the most closely watched election since the 2018 midterms. On paper, it was Republicans who emerged victorious, going 2-for-2 in two separate congressional elections. But their final vote margin in the night's marquee race was much bluer than the district's baseline partisanship.

Because we all need this today and every day.

Two toddlers in New York City are warming hearts all over Facebook after one dad posted a video of the "besties" exchanging a sweet hug.

Maxwell and Finnegan are inseparable, Michael Cisneros, Maxwell's father, told ABC News. The boys, who are 2 years old, have only known each other for about a year.