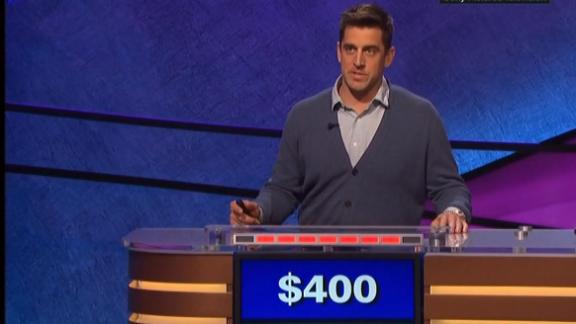 Rodgers, a huge fan of the show, beat astronaut Mark Kelly and Kevin O'Leary of "Shark Tank" in the episode that aired Tuesday evening. Rodgers' chosen charity is Midwest Athletes Against Childhood Cancer.

"I loved it," Rodgers told ESPNWisconsin.com after the show. "The MACC Fund wins, which is amazing. And the people at Jeopardy!, it's such a well-oiled machine there. They crank out five shows a day. They are so talented and they make you feel so important. In my dreams, I want to compete in some sort of semifinals against maybe some other winners and then see if I can make the finals.

The MVP quarterback muffed the final "Jeopardy!" question, which had a Wisconsin angle. The players had to identify photos of two early 20th century men on motorcycles.

The correct answer was Harley and Davidson. Rodgers quipped Ernst & Young, but he later said he should've used his line from a "Celebrity Jeopardy!" skit on "Saturday Night Live."

Rodgers said that his girlfriend, Olivia Munn, was the show's first choice and she wasn't interested.

He also admitted he prepped for the show by researching previously asked questions online.

"It was a lot of fun," Rodgers said. "It was something I dreamt about doing for a long time and I was excited about the opportunity."