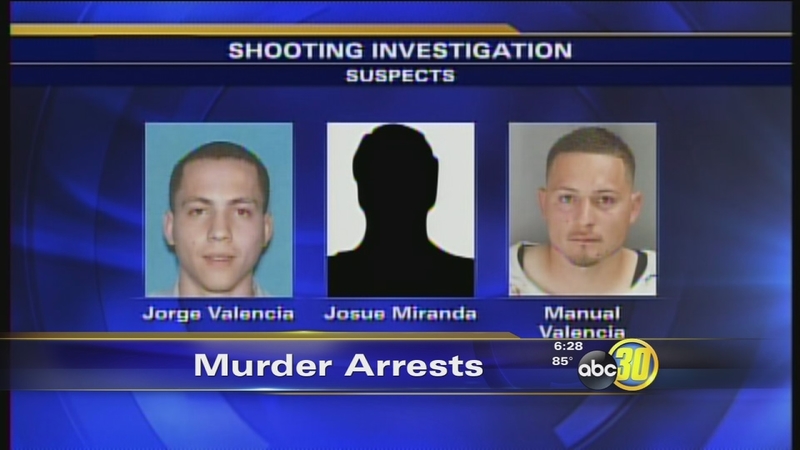 FARMERSVILLE, Calif. (KFSN) -- A break in a major South Valley investigation. Three men are now in jail for the death of a Farmersville mother of seven.

Investigators say 35-year-old Angelica Haro was shot to death at her home near Brundage and Ash Sunday night.

Three of the four suspects in Sunday's killing turned themselves in to Farmersville police. As officers search for the fourth suspect family members are finding it harder and harder to live without their beloved mother.

The family of Angelica says her seven children are finding it too hard to cope with her loss. Tuesday, several of the children became ill, with emergency responders called to help them with their shock.

They say Haro was killed trying to protect her brother, after four men showed up to the house to fight him. Hearing the disturbance in the front yard of her house, she ran out to stop them.

Farmersville Police Chief Mario Krstic says the suspects and victim all knew each other through shared family members.

Chief Krstic explained, "There is a familial relation by marriage."

One day after finding the suspects' black hummer ditched in Lindsay -- three of the suspects -- Jorge Valencia, Josue Miranda and Manual Valencia, appeared ready to face the criminal charges against them.

Chief Krstic added, "We were contacted earlier in the morning by their attorney indicating that they'd like to turn themselves in and at about 11:30 yesterday three of the four subjects did come to the police department and turn themselves in to investigators."

Officers are still searching for Juan Valencia, who they believe was the gunman. All four men face charges of homicide, conspiracy and accessory to a crime.

Chief Krstic said, "The fact that they all arrived at the scene together and engaged in the physical altercation that they did that ultimately ended in the death of this other person."

Juan Valencia could be armed and dangerous. If you know his whereabouts you're asked to call Farmersville police.