Wetter 2017 resulted in a rebound year for Fresno County farmers 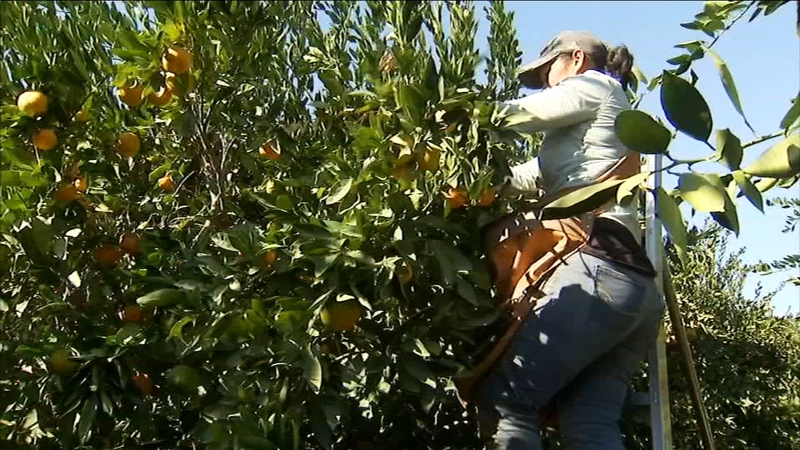 FRESNO, Calif. (KFSN) -- A wetter 2017 resulted in a rebound year for Fresno County farmers. The annual report presented to the Board of Supervisors revealed Ag production was worth $7.02 billion in 2017. Up 13 percent thanks in part to a series of storms.

Global demand for almonds helped the nut maintain its top spot among Fresno County's top 10 crops. Almonds were worth $1.2 billion.

Fresno County Ag Commissioner Les Wright explained, "All we need is water and we can produce seven billion."

Pistachios ranked fourth on the list. Wright noted the nut industry continues to grow in the valley. "They're steadily increasing because we have a lot of new trees coming into production and I see that as a trend into the next decade maybe."

The top three crops in Fresno County are almonds, grapes, and poultry.

Fresno County Farm Bureau CEO Ryan Jacobsen grows both almonds and grapes. He explained, "We saw a rebound on the raising prices. Table grapes were pretty good and the wine prices definitely recovered from the dip they had."

The past year saw mandarins break into the top 10. The small, sweet fruits have been very popular among both kids and adults. The crop surged into the sixth position, worth almost $428 million.

But the positive outlook was also tempered by concerns over new tariffs imposed by China and other countries on many valley crops. Wright said, "It's taken decades for these guys to get into a grocery store in foreign markets and because of the tariffs and the trade war if we can't fill that spot another country will."