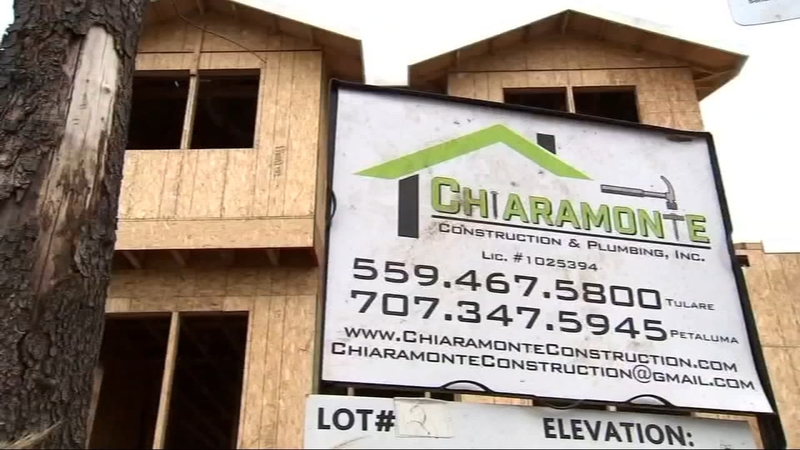 FRESNO, Calif. (KFSN) -- The case against Tulare's Chiaramonte Construction and Plumbing has moved from complaints to criminal charges.

Lynette Kronick says she is one of the listed victims in the criminal complaint against the heads of the company.

After her home burned in the Tubbs Fire, she chose Chiaramonte to build her new house, but she says they later raised the price by $200,000.

She cancelled the contract, but says Chiaramonte never repaid the entire amount her mortgage company gave them, citing a list of charges they said Kronick incurred.

"I think that the Chiaramonte's, whether they went in with good intentions or not, when things started going south, they should have disbanded their projects and not taken any more money from people or taken any money in the first place," Kronick said.

Kronick says Chiaramonte never did any work on her home, and she's still waiting for another contractor to complete it.

After months of missed deadlines and construction problems, Eric Edenfield finally fired Chiaramonte as his homebuilder in May of last year.

"Chiaramonte did everything possible to make our lives completely miserable," Edenfield said. "Even when they knew they couldn't finished the houses, they wouldn't release our permits, so we couldn't fix them ourselves."

Edenfield eventually got the permit and finished the house on his own, but he no longer wanted to live in it, so sold it and moved to Oregon.

But Chiaramonte still has a large lien on the home, which he's hoping to get removed.

"I'm happy to see that the wheels of justice are moving forward because these people are bad players and anybody left out there that they could take advantage of, I would feel sorry for if we didn't do something now," Edenfield said.

"I was happy for my clients named as victims and unnamed in that they start to see that somebody's going to do something about what Chiaramonte did to them," said Richard Freeman, who represents Edenfield and other former Chiaramonte clients.

Action News has not been able to speak to Pam and Sal Chiaramonte or Amy Perry about the charges.

Warrants have been issued for their arrest.