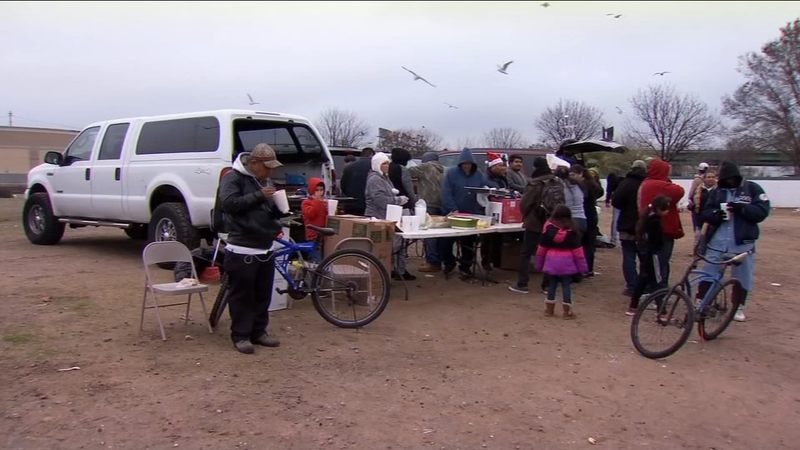 FRESNO, Calif. (KFSN) -- The spirit of Christmas was alive on G street in Central Fresno on Christmas morning.

Ruby Rivera along with her family, friends, and coworkers ditched the normal holiday traditions and started a new one three years ago. They feed warm pozole to those less fortunate.

"We are a little bit wealthy and then we want to give back because we never want to forget where we came from.," said Rivera.

They also handed out toys to children in need. Eric Guerrero was moved to tears when her three daughters were given presents. They missed a gift distribution earlier at a local shelter.

"It means the world," said Guerrero. "My poor babies wanted gifts and we came late and by the grace of God they got a gift at least."

Her daughter's heart was filled with joy.

"I feel good and then my toothache goes away," said Guerrero's daughter.

In East Central Fresno, people in the community were greeted by the smell of barbecue. Hundreds of pounds of chicken and other meat cooked by grill master, Mister Rib. All of it donated to him and all of it given to those in need.

"My Christmas present is seeing the people come and enjoy themselves eating and especially the kids with a smile on their face," he said.

They also handed out toys and clothes to children. Mister Rib has been doing this for 17 years now. He said he received a message from God - to serve the less fortunate.

He is hoping to brighten Christmas for hundreds just like those giving back on G Street.