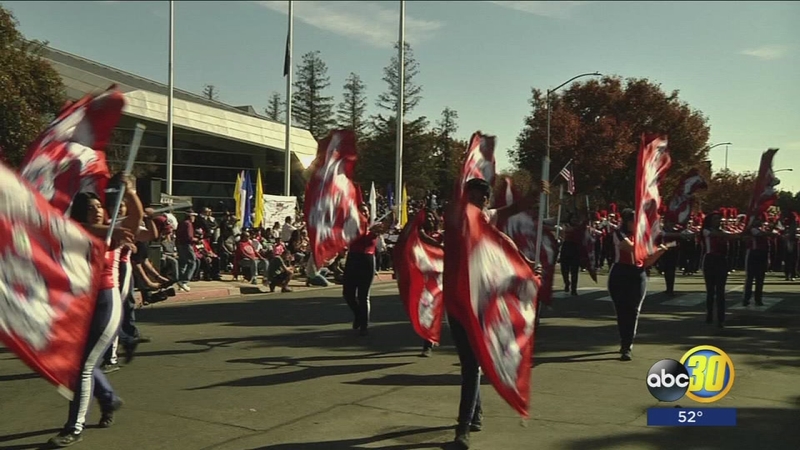 FRESNO, Calif. (KFSN) -- One of the country's biggest Veteran's Day parades took over the streets of Downtown Fresno Saturday.

The military delivered a fiery start to the day for almost 20,000 people in Downtown Fresno.

The glory of this parade reflects on every single veteran, in the skies or hiding in the bushes.

Rep. Jim Costa said, "To stand and to maintain our nation, these men and women have served."

And a lot of them are still serving, even after discharge.

"It's very important that the veterans be recognized and taken care of and today a very special day," said John Decicco.

24-Year-old sailor and National Guardsman John Decicco joined forces with the East Fresno Kiwanis Club to make sure every veteran was loaded up with free eggs, pancakes, and drinks.

And they got a little help from the next generation of helpers.

Javier Valencia said, "It is important to me because people sacrifice their lives just for us."

And some sacrifice without much acknowledgment.

The Cambodians in the U.S. National Defense Corps say they want the same recognition they have seen the U.S. Government give Hmong and Laotian soldiers who helped in Vietnam.

On these streets, the crowds cheered and waved to support every marching member of the military, no matter their contribution or rank, a tribute to their work and the price so many have paid.