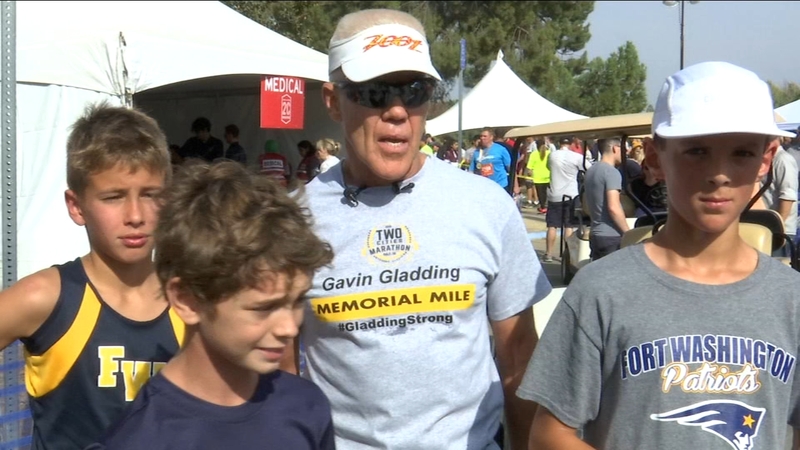 FRESNO, Calif. (KFSN) -- This year there were two extra special runs --a memorial run for Gavin Gladding a beloved school educator who was killed after being hit by a driver. The second, a run in honor of Officer Eloy Escareno who was injured in a car crash last week.

As marathon runners crossed the finish line, between them were hundreds of students, parents, friends and community members running a mile for Gavin Gladding.

He was training for the Two Cities Marathon last month when he was hit and killed by a driver.

"It was really hard. The whole mile that's all I can think about was 'He was finishing this marathon today'. He was definitely with all of us, each and every one of us," said Fort Washington Cross Country Coach Faron Reed.

He coaches where Gladding was an Administrator brought a few of the runners to join in.

Organizers say 400 people were signed up for the memorial run.

"There were so many people that loved him and it was just good to be part of it," said Reed.

He hopes the can continue to inspire kids to enjoy running, just like Gladding.

Later in the race, officers with the Fresno Police Department as well as family members of Eloy Escareno made their way down the last stretch of the marathon.

Escareno was supposed to run the half marathon but instead is recovering from a car crash that injured him and his family.

Officer Lindsay Dozier carried his shoes across the finish line.

"It feels great because he is a good friend of mine and I know he would have done it for any of us. So it feels wonderful," said Dozier.
Report a correction or typo
Related topics:
community & eventsmarathonsmarathon milesdistance running
Copyright © 2022 KFSN-TV. All Rights Reserved.
DISTANCE RUNNING
Mother trains for half marathon to honor daughter who passed away
Man falls 650 feet from NYC Marathon finish line, carried across
Dozens of marathon runners rescued during Utah blizzard
Breaking barriers for athletes with disabilities
TOP STORIES
Man charged with murder of 2-year-old whose father died a year earlier
How reliable are rapid tests? Dr. explains when to depend on results
Is there home appraisal bias in Fresno? Professionals weigh in
Housing Watch: Million-dollar homes at Ventana Hills in Fresno County
Valley Children's Hospital delaying some non-urgent surgeries
Good Sports: Fresno woman gains recognition with indoor rowing
Valley ag business continues to feel impact of supply chain issues
Show More
Family of 5 displaced after house fire in southwest Fresno
Merced police searching for missing 87-year-old man
Website for free COVID tests is here. How does it work?
Biden, 1 year in, says nation weary from COVID but in a better place
Man suffered severe burns after explosion at Table Mountain Casino
More TOP STORIES News