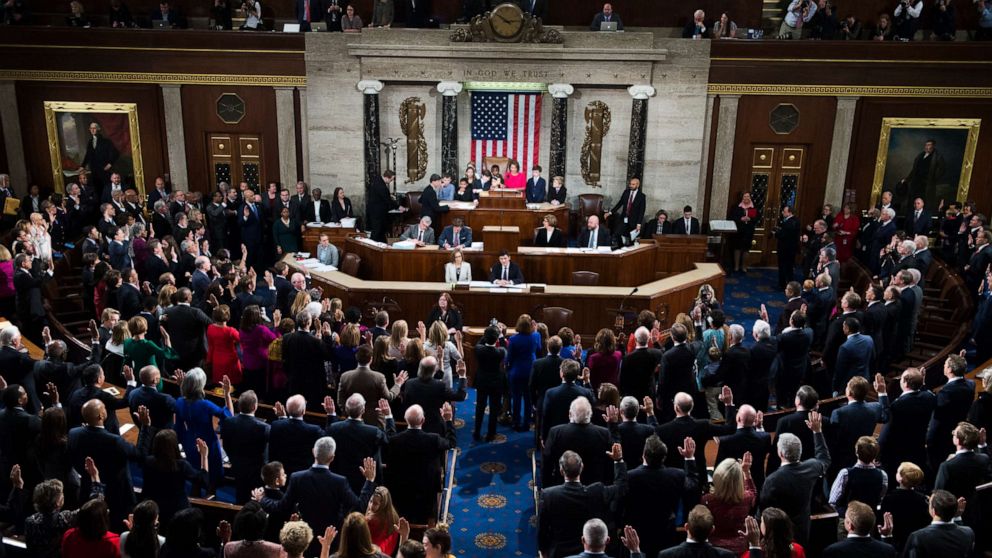 House Democrats battling the Trump administration over access to special counsel Robert Mueller's report and President Donald Trump's tax returns have warned that the president's continued stonewalling of Congress has prompted a constitutional crisis, and could even lead to his impeachment.

Other Democrats want to change the subject.

"I'm not focused on impeachment, I don't think it's the right thing for the country at this point in time," Rep. Anthony Brindisi, D-N.Y., a freshman from a district carried by Trump in 2016, told ABC News.

They worried the discussion on Capitol Hill will overshadow the party's policy agenda ahead of the 2020 election, and provide Republicans with a political cudgel to pursue the party's most vulnerable members.

"Whether we can walk and chew gum at the same time, all they're hearing about on the news is chewing gum," Rep. Jeff Van Drew, D-N.J., told ABC News.

The position of moderate Democrats and the freshmen who helped capture the House majority illustrated the split in the party over how to respond to Mueller's findings and what Democrats say is unprecedented stonewalling of Congress by the administration.

While House Speaker Nancy Pelosi has opposed moving to impeach Trump without bipartisan support, and has pushed Democrats to focus their oversight work and policy agenda on parallel tracks, the divide within the caucus presents another obstacle, should party leaders eventually decide to proceed.

"It's a moderating influence, because they're your friends and they make up the majority, and we have to have a majority," progressive Rep. Steve Cohen, D-Tenn., who has introduced articles of impeachment, told ABC News.

Senior Democrats have increasingly taken a sharper tone against the administration. On Thursday, Pelosi said she agreed with House Judiciary Committee Chairman Rep. Jerry Nadler that the country faced a constitutional crisis, and continued to leave impeachment on the table.

"We're going to do the right thing, that's just the way it is," she said at her weekly news conference. "It is going to be based on fact and law and patriotism, not partisanship or anything else."

On Friday, Schiff endorsed issuing fines to individuals in contempt of Congress at an event sponsored by the news site Axios, under Congress' rarely-exercised inherent contempt authority.

Republicans argued that Democrats' are pursuing investigations to politically embarrass the president, inquiries that will eventually culminate in an impeachment push.

"This is about trying to get to impeachment," Rep. Doug Collins, R-Ga., the top Republican on the House Judiciary Committee, told reporters last week, adding that Democrats were unsatisfied with the special counsel's conclusions.

Mueller's report did not establish that the Trump campaign "conspired or coordinated with the Russian government," and stopped short of determining whether Trump obstructed justice.

While they endorsed defending Congress' oversight prerogatives in the struggle with the executive branch, moderate Democrats saw a distinction between their increasingly aggressive posture, and weighing impeachment.

"The administration's across-the-board refusal to entertain any of the congressional efforts to conduct oversight is problematic," Rep. Stephanie Murphy, D-Fla., a leader of the moderate Blue Dog Coalition, told ABC News. "Let's not conflate the back and forth that's happening now, as we try to get information out of the administration, with coming to a conclusion that we've reached the threshold to begin the impeachment process."

"We've had issues like this before," the New Jersey Democrat said.

Some Democrats in favor of impeachment have argued that the administration's stonewalling of Congress constitutes obstruction of justice beyond the episodes outlined in the Mueller report, and have noted that obstruction of justice was one of the three articles of impeachment the House Judiciary Committee approved against President Richard Nixon in 1974 over Watergate.

"If you get some court orders demanding productions of certain witnesses or material and the president still defies them, in essence he's defying two branches of the three co equal branches of our constitutional system," he said. "That would be a problem."

Others suggested they should wait for Mueller to testify before Congress before deciding whether to launch proceedings, or table discussion of impeachment ahead of the approaching presidential election.

A recent ABC News/Washington Post poll found that a majority of Americans, 56 percent, oppose Congress opening impeachment proceedings against the president following the release of the Mueller report.

"I think we just keep seeking the truth," Rep. Cheri Bustos, D-Ill., the chair of the Democratic Congressional Campaign Committee, House Democrats' campaign arm, told ABC News. "It will become clear to the American public what we need to do."

Democrats are moving to send many of their ongoing disputes with the Trump administration to court, which could heighten the potential for such a scenario.

The Trump administration has argued that Democrats' request serves no legislative purpose. Democrats said they need the returns to study how the IRS enforces tax law for sitting presidents.

Once the House approves the Barr contempt resolution, Democrats are expected to head to civil court to try to get Nadler's subpoena for the full Mueller report and underlying evidence enforced.

"I'm sure, should we get to a point where we feel that we ... are not getting the information we need to get to the bottom of what Russia did in our last election cycle and what we need to do to protect our election system, then we'll have to have a discussion about what we need to do and what the next steps are," Rep. Mikie Sherrill, D-NJ, told ABC News.

Some Democrats signaled that moment could be approaching quickly.

"I don't think there's any question that the president, by his daily actions and by completely ignoring the law of the land as it relates to the Congress, is pushing even the most reluctant of us, like me, to a point where eventually we may have no alternative but move to the I-word," Rep. Emmanuel Cleaver, D-Mo., told ABC News.
Report a correction or typo
Related topics:
abc newsnational
Copyright © 2021 ABC News Internet Ventures.
More Videos
From CNN Newsource affiliates
TOP STORIES