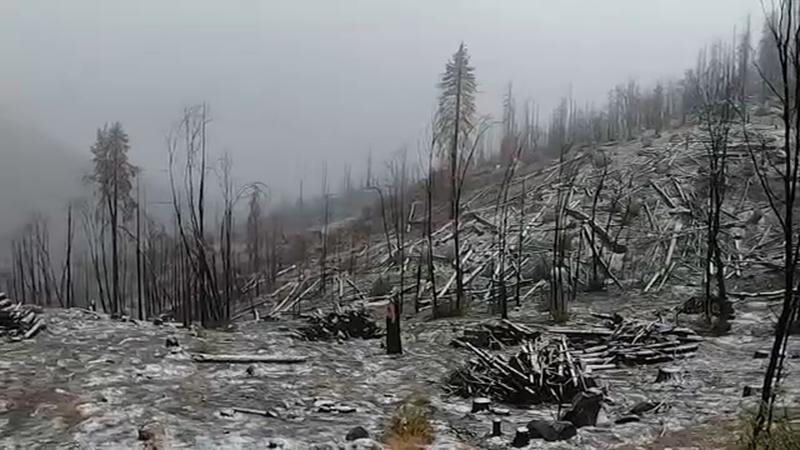 FRESNO, Calif. (KFSN) -- The storm rolling through the Central Valley Monday caused concerns about flooding and mudslides in the Sierra Nevada mountains Monday, especially in burn scar areas from the Creek Fire.

All of them were working to ensure things were running properly as rain and snow fell on Shaver Lake and the foothills.

Certain areas of concern like Camp Sierra and the Big Creek Bridge saw water moving quickly, but functioning well and flowing into the right channels to prevent flooding.

Boulders and rocks fell onto the roadways as water rushed from the hillside.

The Fresno County Sheriff's Office has extra deputies on patrol, including a couple of search and rescue deputies.

Monday night, officials were asking anyone who lived in the Creek Fire burn scar to be ready to go at a moment's notice as deputies monitored the hillsides for any signs of movement.

"There's a ton of different factors that go into it and different factors contribute differently throughout the entire burn scare area, and so we look at those different areas and try to figure out our areas of concern and then mitigate it from there," said Fresno County

Officials said the snowfall Monday morning and afternoon helped hold things in place, but if it started to melt to quickly, it could cause flooding and debris flow.

It snowed at Shaver Lake this morning. @ABC30 ❄️ pic.twitter.com/H0WOp3l6VA

Two school districts, Sierra Unified and Pine Ridge Elementary, canceled classes because of the flash flood advisory that was in effect.

They'll be monitoring the storm throughout the evening to see what, if any, damage it causes.

The Fresno County Sheriff's Office will also be watching closely to see if there are any changes along the most at-risk areas of the Creek Fire burn scar.

The sheriff's office has two maps available for residents.

One shows the areas most at risk for mudslides. You can find it here.

The second map shows where evacuation warnings and evacuation orders are in place.

You can find a link to that map here.