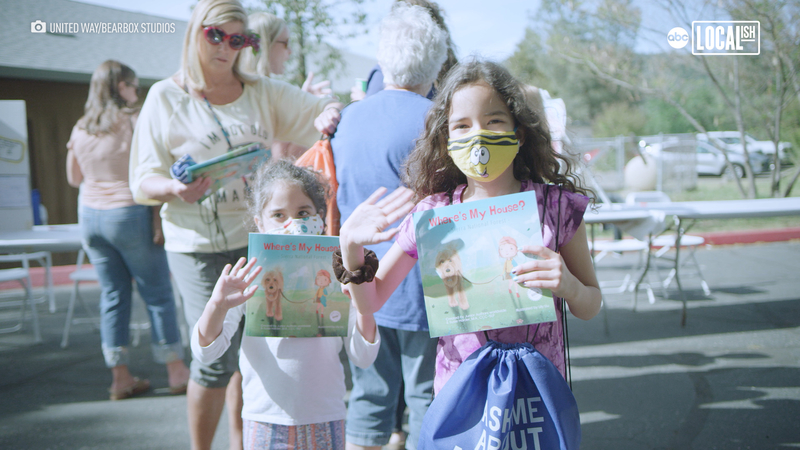 AUBERRY, Calif. -- A new book is providing hope and healing for children who lost their homes during the Creek Fire in Central California.

"The book and things like that have helped us start seeing the good," said Audrey Slaine-Hooper, who lost her family home during the Creek Fire in Central California in 2020.

The blaze, which burned more than 370,000 acres and destroyed more than 850 buildings, was the largest single wildfire in California history.

Susie Harder, a speech pathologist and founder of the Junior Authors Program, saw an opportunity to help.

"I was looking for books and looking for things that might help kids travel that journey in a positive way and I didn't see anything," Harder said. "So I was like okay, we'll create it."

Harder wrote the book "Where's My House?", a story about a young girl and her dog and their journey after a fire burns down their dog house.

"It's such a big concept to say you lost everything, everything is going to be okay. It doesn't feel okay," Harder said, explaining that the book is a way to shift the conversation for kids who lost homes.

"So instead of someone coming up and saying I'm so sorry about your house, what if they said hey, how's the book going?"

The creation process of the book also heavily involved the kids themselves, allowing them to vote on characters, settings and storylines.

"I told her my dog's favorite toys were a bone and a ball, and she actually added those toys in the first page of the book," said Stallone Wood, a student at Pine Ridge Elementary who lost his home. "And I think that's pretty cool."

"We had kids locally... and then it went statewide and national," Harder said. "And then by the end of the week we had kids worldwide who were jumping on and voting and helping us decide all the things that would go into this book."

The kids were also able to add their own drawings of their lost homes to the book and were named Junior Authors. Harder hosted a book signing to launch the book and introduce the young authors to the community.

"Hearing kids after the book signing say this is the first time they've felt seen, not for the fire, but for me... I mean that makes all of it worth it," Harder said.

All proceeds from book purchases go to helping children who lost homes during the Creek Fire.