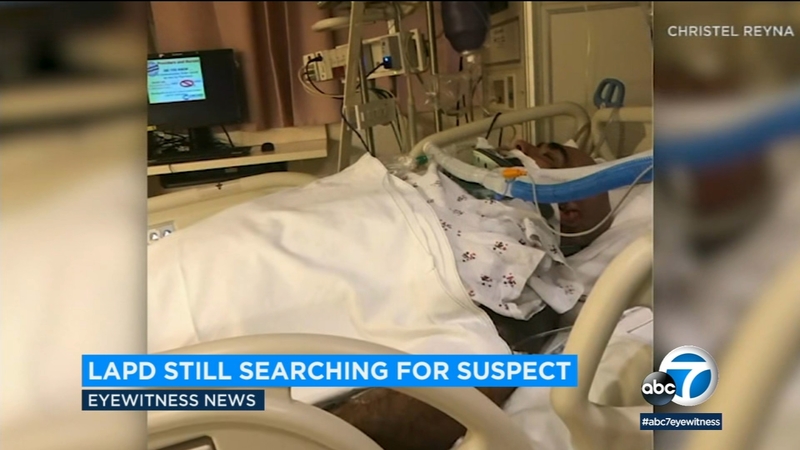 LOS ANGELES -- It's now been roughly a week since a man was brutally beaten outside Dodger Stadium, and police are still looking for his attackers on Friday.

Rafael Reyna remains in critical condition but is now breathing on his own.

Los Angeles police provided an update on the case Thursday and say they are still looking through surveillance video.

A witness gave investigators vague descriptions of the two individuals wanted. One of the suspects was described as a young Hispanic man in his mid-20s. He's approximately 5 feet 8 inches tall and weighs about 150 pounds. He was clean shaven and was last seen wearing a gray sweatshirt, blue jeans, and a blue Dodgers baseball cap. The young woman is also described as Hispanic and in her 20s. She's approximately 5 feet 4 inches and weighs about 110 pounds. She has long black hair and was wearing a white Dodgers jersey and blue jean shorts.

Officers ruled out other potential suspects who were seen leaving in a white SUV.

The wife of the 47-year-old victim says her husband suffered a fractured skull and bleeding on the brain after the fight early Saturday morning following a Dodgers game. She was on the phone with him at the time and says she heard a man and a woman arguing with him.

A fight at a Dodger Stadium parking lot during Friday night's game left a 47-year-old man with critical injuries.