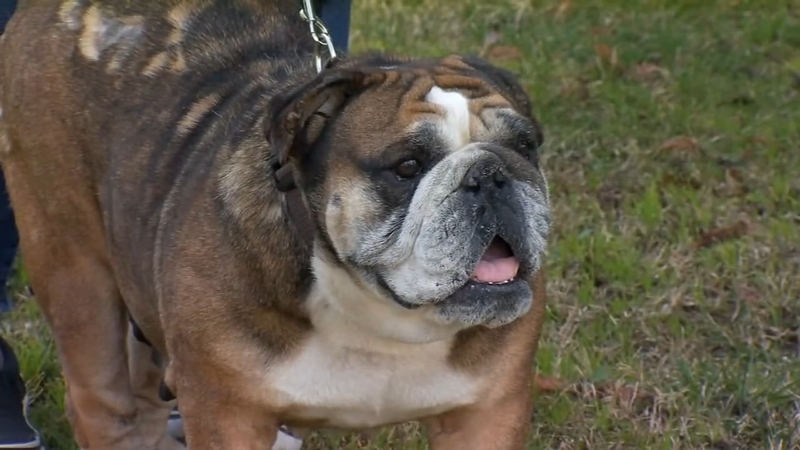 FRESNO, Calif. (KFSN) -- A Fresno County woman is relying on her network of animal advocates to help a dog recover from what she says was years of neglect.

Sara Hellett works with Central Valley animal rescues and is in the process of starting her own dog rescue.

Hellett wasn't willing to buy them.

But she noticed none of them were spayed or neutered, so she offered to help the woman find them good homes.

Eventually, the woman gave her a Bulldog named London, whose health issues were worse than Hellett expected.

On Monday, a veterinarian spent hours looking over London, and determined she had severe ringworm, an infected tail and teeth, and ear problems too.

"She is so kind, so gentle," Hellett said. "At the vet's office, she was great around everybody. And I honestly think that you know, she knows that she's getting the help that she needs and that she is just finally going to feel better."

At the vet, Hellett learned surgeries would cost at least $1,100.

So she asked for help, and Kings SPCA Halfway Home, a non-profit no-kill shelter near Lemoore, answered the call, posting about London on their Facebook page, with links to donate to her recovery effort.

They say they are covering London's medical costs even if they don't raise enough money.

If they raise more than enough, they say funds will help them save other animals in need.

"It's a lot to take on but we weren't going to fail London," Hellett said. "We're going to get her the help that she desperately needs right now."

Hellett believes London's health issues are the result of years of neglect-she was most likely an outside dog and overbred for financial gain.

London returns to the vet for her surgeries in a few weeks.

After that, Hellett will continue fostering her until they find her a permanent home.

How you can help London: