DOJ declines to back Rep. Mo Brooks in lawsuit for role in allegedly inciting Capitol riot 'This is how I'm going to die': Officers tell Jan. 6 stories

WASHINGTON -- The Justice Department declined a request from Rep. Mo Brooks, R-Ala., Tuesday night to intervene for him in a lawsuit brought by a Democratic lawmaker suing him for his role in allegedly inciting the Jan. 6 attack on the U.S. Capitol.

In a new filing, the DOJ said it has determined it does not believe Brooks was acting within the scope of the duties of his office when he spoke in front of a pro-Trump rally just before rioters stormed the building, telling the crowd, "today is the day American patriots start taking down names and kicking a**."

Brooks had asked for the Justice Department to replace him as a defendant in a lawsuit brought by Rep. Eric Swalwell, D-Calif., providing him legal immunity under a law known as the Westfall Act that former President Donald Trump similarly has sought to use to shield him from an effort by columnist E. Jean Carroll to sue him for defamation over his denial of her rape allegation.

"We appreciate the thoughtful analysis by the Committee on House Administration and the Department of Justice and could not agree more with their conclusion," Rep. Swalwell's attorney Philip Andonian said in a statement Tuesday night. "This conduct manifestly is outside the scope of Brooks's employment as a member of Congress and the House and DOJ made the right call in requiring him to answer directly for his actions. This is a great step toward justice." 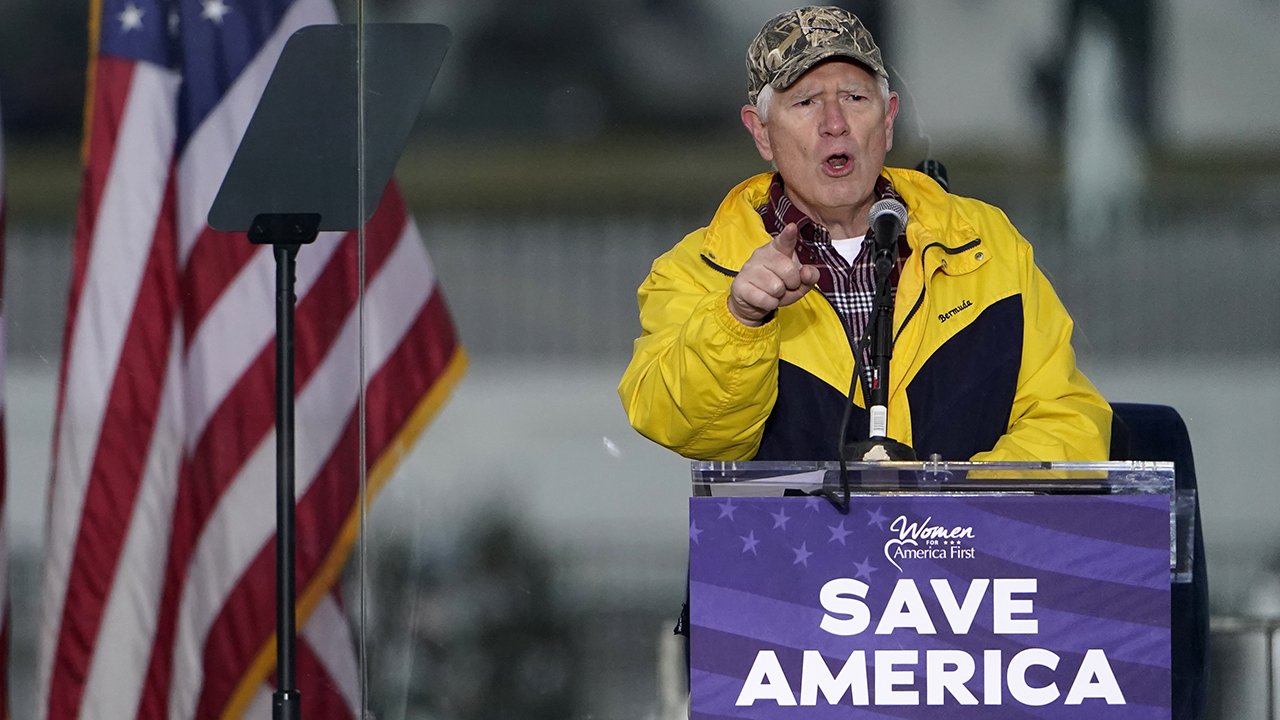 In this Jan. 6, 2021 file photo, Rep. Mo Brooks, R-Ark., speaks in Washington, at a rally in support of President Donald Trump called the "Save America Rally."

Attorney General Merrick Garland faced a barrage of criticism last month when the department said it would continue to seek to substitute itself for Trump in the lawsuit, arguing that the law did apply to Trump even if they believed his statements were "crude" and "disrespectful."

Brooks similarly argued that by speaking to the rally and repeating Trump's false claims of a stolen election that he was performing an official act of his office by representing the interests of his constituents.

Brooks has not responded to ABC News' request for comment following the DOJ's decision Tuesday.

But the chair of the House Administration Committee, Rep. Zoe Lofgren, D-Calif., disputed that assertion in a July 23 letter to the Justice Department, saying that Brooks' conduct was "in furtherance of political campaigns" and thus should be deemed outside the scope of his office.

"Essentially, in deflecting the allegation that his speech was an incitement to violence, Representative Brooks has sworn under oath to the court that his conduct was instead in furtherance of political campaigns," Lofgren wrote. "As noted, standards of conduct that apply to Members and precedents of the House are clear that campaign activity is outside the scope of official duties and not a permissible use of official resources."

The Justice Department in its late filing Tuesday night largely backed Lofgren's position, saying, "Brooks's appearance at the Jan. 6 rally was campaign activity, and it is no part of the business of the United States to pick sides among candidates in federal elections. ... Indeed, although the scope of employment related to the duties of a Member of Congress is undoubtedly broad and there are some activities that cannot be neatly cleaved into official and personal categories, Brooks's request for certification and substitution of the United States for campaign-related conduct appears to be unprecedented."

"Members of Congress are subject to a host of restrictions that carefully distinguish between their official functions, on the one hand, and campaign functions, on the other," the department said. "The conduct at issue here thus is not the kind a Member of Congress holds office to perform, or substantially within the authorized time and space limits, as required by governing law," the DOJ wrote.

The DOJ also notes that "if proven" the conduct Brooks is alleged by Swalwell to have engaged in "would plainly fall outside the scope of employment for an officer or employee of the United States." "... conspiring to prevent the lawful certification of the 2020 election and to injure Members of Congress and inciting the riot at the Capitol."

"Alleged action to attack Congress and disrupt its official functions is not conduct a Member of Congress is employed to perform and is not "actuated . . . by a purpose to serve" the employer, as required by District of Columbia law to fall within the scope of employment," the department wrote in its filing.

Legal experts have been closely watching what the DOJ would ultimately decide in Brooks' case, believing it could have a significant impact on other cases brought against allies of former President Trump being sued for encouraging or inciting the pro-Trump mob that stormed the Capitol on Jan. 6.

It is still unclear, however, whether the judge overseeing the case will decide to grant Brooks' request to substitute the DOJ for himself despite DOJ's stated opposition Tuesday evening.

In a separate filing in the case Tuesday, the General Counsel for the House of Representatives also said it would decline to represent Brooks in the suit given he's being sued by another member of Congress and declined to say either way whether Brooks' comments at the rally constituted him executing an official duty of his office.
Report a correction or typo
Related topics:
politicsdepartment of justiceus capitollawsuitu.s. & worldcongress
Copyright © 2021 ABC News Internet Ventures.
TOP STORIES
Air purifiers could protect you from Valley's pollution, doctor says
Fresno County residents can now get the flu shot at drive-thru clinics
3 people dead after Amtrak train derails in Montana
Hot air balloons take to skies as Clovis Fest kicks off
Most Valley athletic events continue Friday despite poor air quality
Man shot and killed in southeast Fresno, police say
Man attempts to storm cockpit, strangles attendant on JetBlue flight
Show More
$30K in rewards offered for Brian Laundrie's whereabouts
8 arrested on hazing charges in VCU freshman's alcohol poisoning death
Matt Amodio passes $1 million mark on 'Jeopardy!'
#22 Fresno State begins conference play with 38-30 win over UNLV
Pedestrian dies after being hit by car in Fresno, police say
More TOP STORIES News