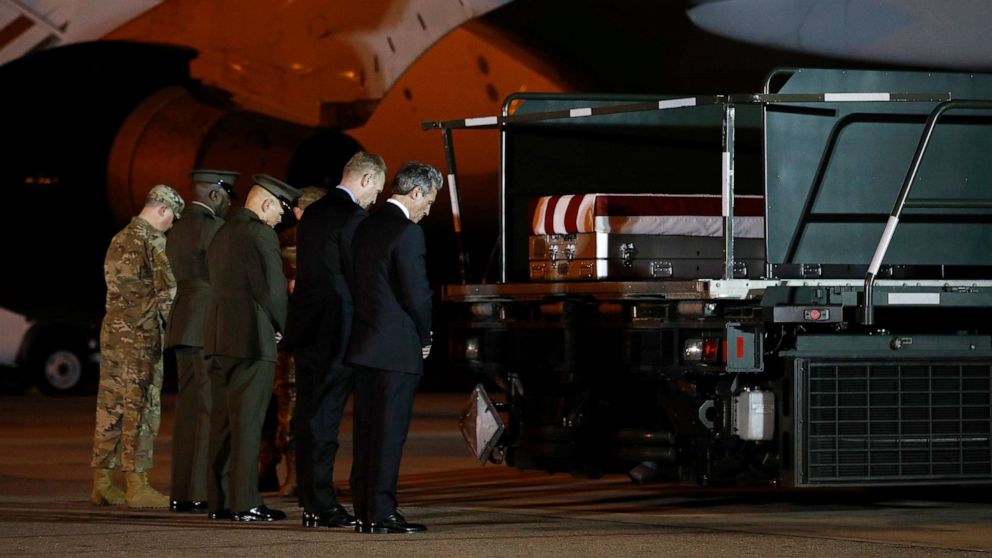 Gen. David Berger, the Marine Corps commandant, told ABC News on Tuesday that while he saw no evidence of Russians offering bounties to kill U.S. troops during his time commanding Marines in Afghanistan, the families of fallen service members are "entitled" to answers.

"You just have to look at the facts like always, investigate thoroughly," said Berger, who spoke with ABC News Chief Global Affairs Correspondent Martha Raddatz in an exclusive interview airing this Sunday.

The White House on Tuesday continued to provide briefings to select members of Congress on the intelligence about reported Russian bounties on U.S. troops in Afghanistan, which a military official told ABC News showed that Russian intelligence officers had over the past year offered to pay Taliban militants to kill American troops. Lawmakers have called on the administration to share more information and potentially take action.

One of the incidents being looked at for a possible connection to the alleged Russian scheme is an April 8, 2019 bomb blast on an American military convoy near Bagram Air Base that killed three Marines, according to The Associated Press.

Cpl. Robert A. Hendriks, Sgt. Benjamin S. Hines and Staff Sgt. Christopher K.A. Slutman were all killed when a car bomb detonated near their vehicle as their convoy headed back to the base. They were among the 23 Americans who died in Afghanistan in 2019 either from combat or non-combat reasons.

Hendriks' father Erik told ABC News on Tuesday that it would "break his heart" to find out that reports of Russian bounties were true.

"If 1 ounce of American blood was spilled, and this possibility of Russian involvement was not given to our Warriors on the ground, then yes! Shame on this administration as to send a Marine in an already chaotic and dangerous war zone being shorted intel," Erik Hendriks told ABC News in a text message. "(If it's true) yes it cheats every man woman, husband son and daughter of life or death information. I pray this is not what my government has come to. I hope this proves wrong."

Erik Hendriks also said over the phone that he was disappointed no one from the Trump administration has yet reached out to his family to offer consolation or answers, but was careful to divorce his anger from politics.

"I'm not shooting darts at Trump's face," he said, also stating that he has earned the right to speculate and question.

Berger told Raddatz that he doesn't recall ever seeing anything about Russian meddling, but said, "it takes a lot to surprise me now."

"Where we operated in southern Helmand we didn't have, to my knowledge, Russian influence," Berger said. "It could have been, but I was not aware of it."

The information about the Russian bounty program was first gleaned from special operations raids on Taliban locations in January where large amounts of American cash was found, according to a military official.

Subsequent intelligence about the program was specific enough that both the military and CIA took steps to increase security and surveillance of Russian operatives inside Afghanistan, a source told ABC News.

Months later that intelligence was briefed to senior national security officials, according to the military official.

President Donald Trump and White House officials have said he was not briefed on the intelligence because it had not been fully verified by the U.S. intelligence community. But the New York Times quotes two officials as saying that the information was included in written form in the president's daily intelligence briefing from late February.

While the April 2019 incident is among those under investigation for possible links to the bounty program, the Pentagon said in a statement issued late Monday that it has not found any corroborating evidence.

"The Department of Defense continues to evaluate intelligence that Russian GRU operatives were engaged in malign activity against United States and coalition forces in Afghanistan," said Jonathan Hoffman, the Pentagon's chief spokesman. "To date, DOD has no corroborating evidence to validate the recent allegations found in open-source reports. Regardless, we always take the safety and security of our forces in Afghanistan -- and around the world -- most seriously and therefore continuously adopt measures to prevent harm from potential threats."