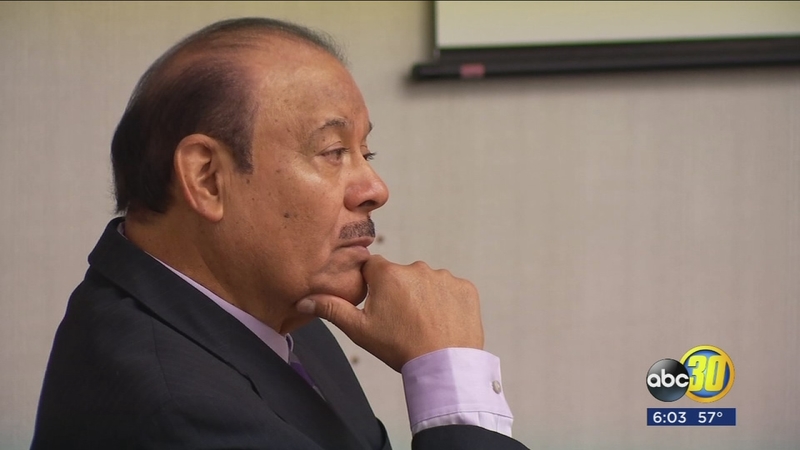 FRESNO, Calif. (KFSN) -- The former Fresno County sheriff's deputy on trial for child molestation gave a firm denial Tuesday, when a suspicious father set up a camera in his daughter's bedroom, the result shocked him.

Video from the very first night after he set it up showed what he considered inappropriate touching by Rex Garcia but Garcia says it really doesn't show anything incriminating.

"What were you doing with your hands?" asked his defense attorney Antonio Alvarez as he showed the video in court.

The retired police officer and sheriff's deputy denies ever touching the girl in a sexual way. He says he'd go into every room of the house every night to make sure everything was locked up tight. But he admits he covered up the camera when he noticed it after a few nights.

"I can only surmise that when I walked in and make sure the door was okay, secured the window, that I turned and saw the camera at that point," Garcia said. "That's when I left the room and got the t-shirt and covered it up."

Prosecutor Amy Freeman says the motion sensor camera never recorded him coming into the room before he blocked the camera's view. Garcia says he went into officer mode when he saw it, but he never confronted anyone about why it was in the teenager's room before police arrested him a couple days later.

Despite the charges against him, five friends testified they absolutely trust Garcia.

"Rex Garcia has integrity like virtually no other man," said defense attorney and friend Eric Schweitzer.

His wife also backed Garcia, saying she never doubted him, no matter the accusations from the girl. She says her husband would only go into the room to make sure everyone in the home was safe.

"Would it surprise you to know he was in there with her for 30 or 45 minutes?" Freeman asked her.

"Rex was never in there for 30 or 45 minutes," Josephine Garcia said.

She says watching the video does not change her mind.