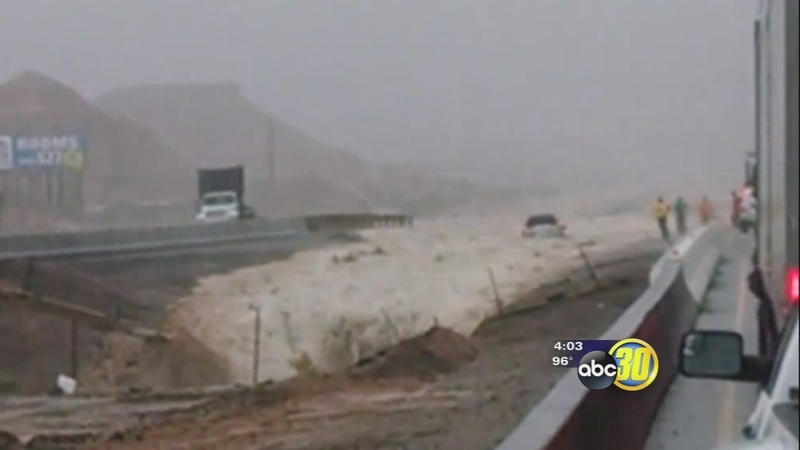 FRESNO, Calif. (KFSN) -- A Fresno couple's cross country vacation came to an abrupt end hours after it started. On Monday their van was swept away by floodwaters north of Las Vegas.

When you see the video of their van being swept into a ravine you wonder how Margie and Loren Miller even survived. The Fresno couple was driving on Interstate 15 in heavy rain 50 miles northeast of Las Vegas.

Margie Miller of Fresno said, "I just started praying. That's all I could do. Lord help us. I was just praying over and over and over for a miracle and it was."

The van Margie Miller and her husband Loren were driving from Las Vegas to St. George, Utah was a mangled, muddy mess. Cellphone video showed their van caught up in rushing floodwaters in the Interstate 15 median in Moapa, Nevada. You can see how construction workers tried to help the couple but Margie Miller said it was too late. Their van was swept over a 15 foot drop.

Miller explained, "We were on the median and we just got caught. My husband tried to turn the van around so our car just starting sliding. All of a sudden this big whoosh of water just pushed us down like a waterfall. Then we're in this big hole like a lake, just big waves and all that stuff."

Truck driver Shane Dukeman captured the dramatic events on video while he was stuck in traffic.

Dukeman said, "When it started going over I knew someone was in there. First of all, for the construction worker to jump in for an empty van would have been dumb. Second of all, the doors started trying to open because they were trying to get out so I knew for a fact someone was in there. You just sit there and go, God I hope they make it through it."

Margie opened her door while holding tight to her husband's hand.

Loren Miller told the Las Vegas Review Journal, "When I saw how far she went, she went around the corner and I couldn't even see her."

Margie added, "I was swimming and bobbing. I was praying and then pretty soon my feet touched ground and there was a policeman right there."

Those workers who tried to stop the van were able to rescue Loren.

Margie said, "He was on top of the car and he thought I was gone. He didn't know if he'd see me again but there was some guys up above who threw a rope to him."

The couple planned to golf in St. George before continuing on to see their son in Kentucky. They just bought the brand new Toyota Sienna van a few weeks ago.

Now Loren and Margie Miller were having the van towed back to Las Vegas. They planned to rent a car and then drive back to Fresno.

The Millers were disappointed but extremely grateful to be alive.