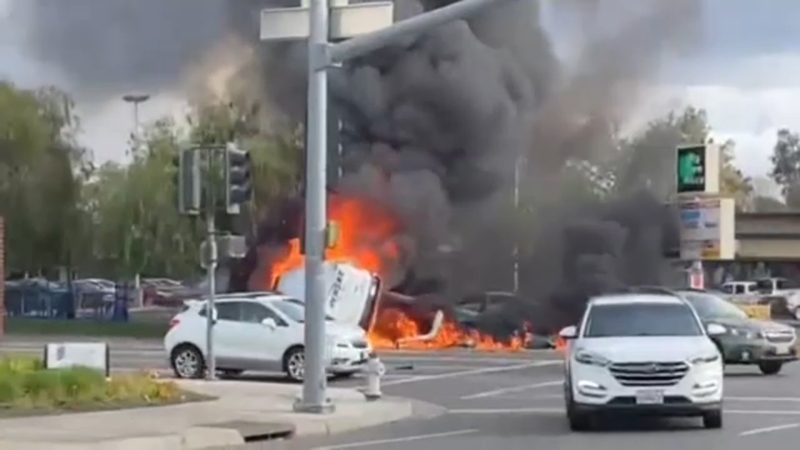 Fresno police say there is 'an alarming rate of collisions citywide'

FRESNO, Calif. (KFSN) -- Fresno police say we are seeing an alarming increase of deadly collisions across our city, many of which have been preventable.

"Understand the responsibility of driving a car and that it's not only just you that you're putting at risk, it's other people," said Deputy Chief Mike Reid with the Fresno Police Department.

Police say if we continue at this pace, we could see more deadly crashes this year than all of last year.

Memorials have been popping up around the city of Fresno since the start of the year - many created by family members who have lost a loved one in a collision.

"Amee to me was just a great girl that I met," said Reynaldo Perez, Amee Van's fiancé, and mother of two of his children, as he struggled to hold back tears.

Van was on her motorcycle last week on East Harvey near North Maple Avenue. Fresno police said she was speeding on E. Harvey when she attempted to stop at the intersection, but didn't make it in time.

She was hit by a driver on Maple Avenue and died the next day.

"I don't know exactly where she was going, but maybe she just needed a break, take a little breather and then come back home," said Perez.

But she was one of many people in Fresno who never made it home.

This year, so far, 21 people have died in collisions across the city.

On March 5, LaVonda Mosley, 55, was hit and killed while trying to get to the bus stop.

According to police, the driver, Hope Whitmore, 30, took off but was later arrested.

On March 15, a small vehicle drove around railroad crossing arms that were lowered at Maple and Central Avenue.

An Amtrak train couldn't stop in time and struck the car, killing two people inside.

On March 20, Francisco Portillo ran a red light at Cedar and McKinley Avenue.

Officials said he was trying to get away from Fresno County Sheriff's Office deputies.

He slammed into multiple vehicles at a stoplight igniting a large fire.

54-year-old Juan Dominguez and two women in their 20s who have not been identified, were killed.

Five of the 21 people who have died in collisions in Fresno so far in 2021. @ABC30 pic.twitter.com/LPbud6lwr6

Deadly collisions are on the rise this year according to @FresnoPolice.

Between Jan. 1 - March 29 here are the total number of deadly collisions over the years:

Of the 17 deadly collisions we’ve had so far this year:
- 5 involved pedestrians
- 1 involved a train
- 4 involved motorcycles
- 2 involved individuals trying to get away from law enforcement. @ABC30 @FresnoPolice says pedestrians totals are comparable to what we normally see.

So far this year, there have been 17 deadly collisions. That's four more compared to the same time period in 2020 and 2019.

Officials say deadly crashes are consistently due to distracted driving, speed, or impairment.

"Remember that in large part it's your families that's driving around the streets of Fresno and anybody can be a victim of this if someone's not paying attention." said Deputy Chief Reid.