It's a one-day program where girls and women ages 14 to 18 learn what it takes to be in the firefighting industry.
KFSN
By Amanda Aguilar 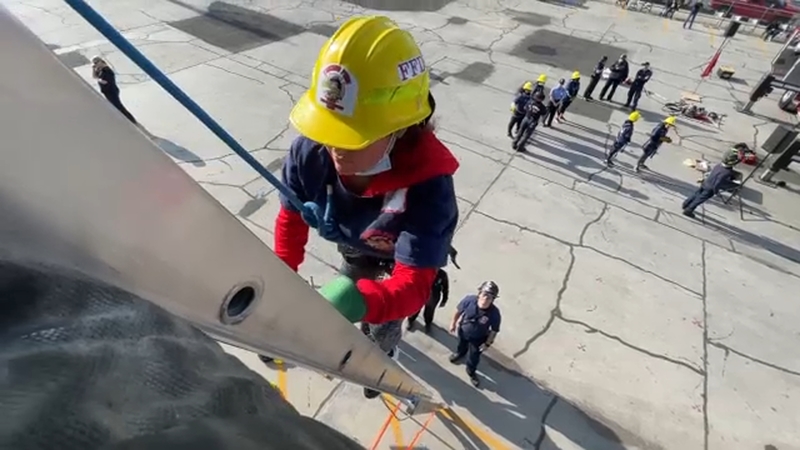 FRESNO, Calif. (KFSN) -- The Fresno Fire Department is hoping to break barriers in a male-dominated profession.

It's a one-day program where girls and women ages 14 to 18 learn what it takes to be in the firefighting industry.
70 girls spent the day in the shoes of a firefighter.

"Often times we find that they didn't know it was an option," said Fresno Fire Chief Kerri Donis.

Fresno Fire, along with other departments around Central California, aimed to show them it's a profession for anyone.

"Anybody, any gender, any ethnicity is capable of performing the job and being in this type of career," said Fresno firefighter specialist Christine Wilson.

The group of girls hit seven different stations that focused on a different skill -- such as using a chainsaw, climbing a ladder and an exercise called a "ceiling bump."

"You get a feel for what it's like to pull a ceiling, which we often do inside of a structure fire," Wilson explained.
One participant is the daughter of a Fresno City firefighter.

She said she doesn't see herself going into the career, but to see so many other girls interested in learning more about it made the day special.

"Being able to see these girls who have never really been exposed to this, just seeing the smile on their faces and just thinking it's so cool...," said Bailey Elliott.

Chief Donis said empowering girls is what the camp is all about.

"Even if you don't become a firefighter, to have a day of empowering activities that they will make a memory of, it's a home run," she said.

In the future, Chief Donis hopes to host two empowerment camps a year.