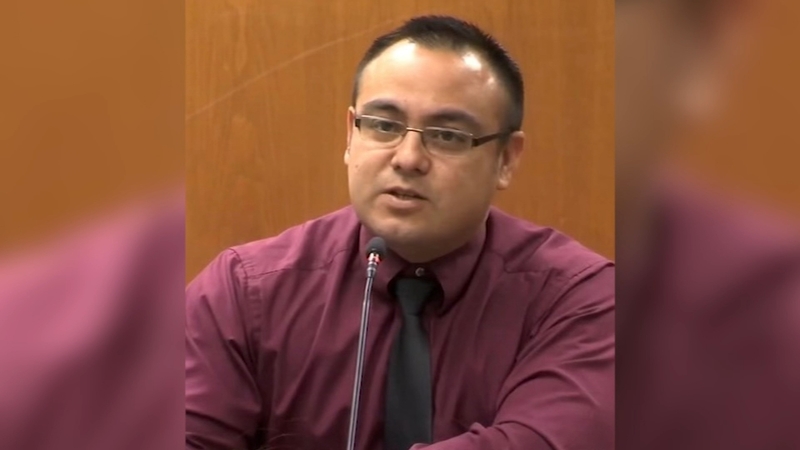 FRESNO, Calif. (KFSN) -- A Fresno police officer accused of deadly distracted driving could create a cost for himself and the city's taxpayers.

Investigators say Jose Pulido spent more than 20 seconds crossing the street before a police car hit him just before he finished.

They believe the officer who hit him did not have his eyes on the road.

Fresno police detective Benito Soto testified in a murder trial three years ago, but on Monday, Soto was the defendant whose attorney entered a plea on his behalf.

"(He will) plead not guilty to the misdemeanor and the three infractions," said defense attorney Roger Wilson, who made the court appearance for Soto Monday.

The homeless man was pushing a bicycle across Fresno Street when Soto hit and killed him in an unmarked Fresno police car.

Police said Soto had a green light, but they say it's still a driver's responsibility to avoid a pedestrian, unless the person jumps in front of the car at the last second.

In the warrant, investigators also say they got phone records showing Soto was texting two people in the minutes before the crash.

They say he got his last text eight seconds before hitting Pulido and his text box shows he was responding to the text.

"That's pretty strong evidence that he was texting when he should've been watching what was going on," said legal analyst Tony Capozzi.

Police say Soto is now on modified duty pending the outcome of an internal affairs investigation.

He's been an officer for more than 13 years, and this is his second misdemeanor charge in that time after a 2012 DUI.

Friends in the homeless community remembered Pulido with a painting and a vigil in the weeks after his death.

Capozzi says Soto may have also given Pulido's family a reason to sue the city.

"He's on city time," Capozzi said. "He's within the scope of employment. He was negligent. Should the city be responsible? They may well be in this particular case."

Soto is facing no more than a year in jail if he's convicted.