Fresno police officers were busy responding to a rash of shootings overnight. Three of them occurred within the same 30 minutes.
KFSN 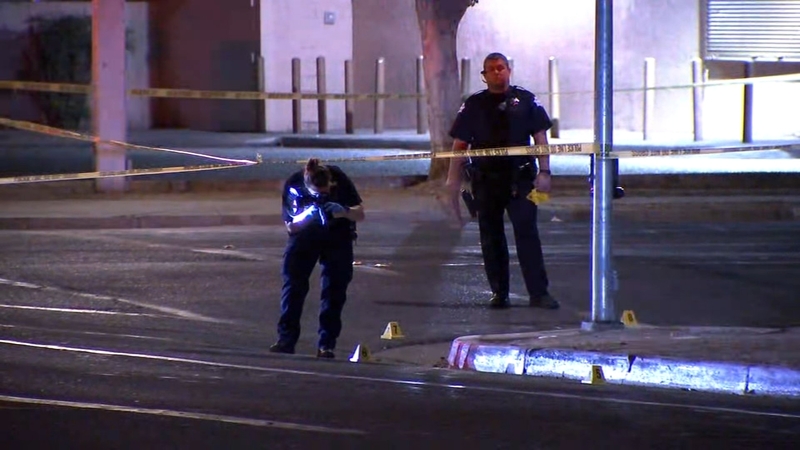 FRESNO, Calif. (KFSN) -- Fresno police officers were busy responding to a rash of shootings overnight. Three of them occurred within the same 30 minutes.

The gunfire began in southeast Fresno on Tulare Street and Pottle Avenue just before 10:30 p.m. on Monday.

Witnesses say a man in a light-colored SUV got out of a vehicle and start kicking the front door of an apartment. He then opened fire, and bullets hit the building several times.

RELATED: Man uncooperative with officers after he's shot in the leg in northeast Fresno

Investigators believe the gunfire struck one of the cars in the area, but no one was hurt.

A person's car was hit as they drove into an apartment complex on Dakota and Hughes Avenues in central Fresno after 11 p.m. Officers say another parked car was also struck.

Fresno police say they are thankful that no one was hurt in any of those three shootings.

RELATED: Shootings in Fresno area up 50% compared to this time last year

"I couldn't imagine being these kids and being woken up with gunfire hitting your residence. People telling you to get on the ground, and then somebody kicking at the front door... how scary would that be?" said Fresno Police Lt. Tim Tietjen.

"And to me, that's uncalled for. We need to put a stop to that, so we're going find these individuals and we're going to put them in jail. This is not OK with us," he added.

Investigators have not determined if the shootings are related. No suspects have been identified.