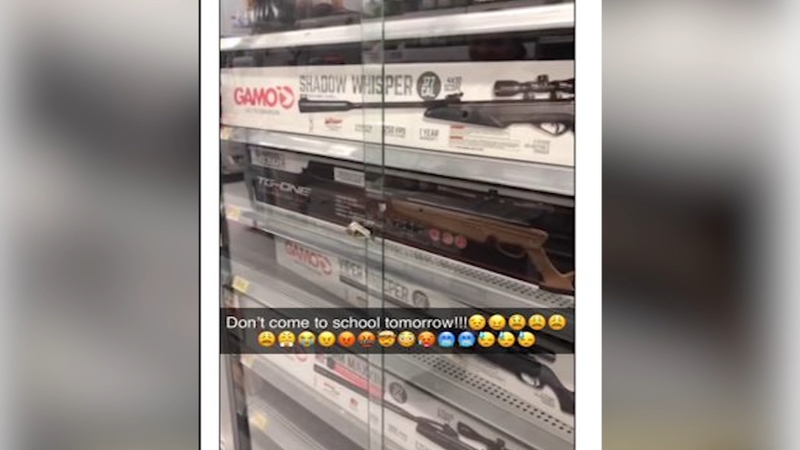 FRESNO, Calif. (KFSN) -- A 15-year-old girl has been arrested after she made terror threats against Edison High School, Fresno Police said on Thursday.

Chief Dyer said the girl made a threat on Snapchat to shoot up the school and posted a picture that showed a Walmart display case - with several rifles inside it.

On the photo was a message that read, 'Don't come to school tomorrow'.

The FBI alerted the Fresno Police Department to the threat and an officer followed the student, who was on the bus to school. She was pulled out of class and admitted to making the threatening post, according to Fresno Police.

#BREAKING: Chief Dyer says @fresnounified student made threat on @Snapchat to shoot up Edison High today. Here’s picture of weapon posted on social media. Officers pulled 15 yo female out of class and she admitted to officers that she made threatening post. She has been arrested. pic.twitter.com/FdA0OZtl6E

Dyer said she said she snapped the photo because in order for her to continue to use this site there had to be so many posts made.

The student has been arrested and charged with making a terror threat.

Authorities said after an investigation, it was determined that the threat was not credible.

A pellet gun was found in the student's home.

Fresno police say the aunt of the teenager was aware of the post and was disturbed by it. However, she did not alert authorities.

Superintendent Bob Nelson said there was nothing in the student's profile that would indicate concern.

He described her as a "very successful student enrolled in a robust course taking pattern."

But Nelson wanted all Fresno Unified students to know this type of behavior will not be tolerated.

"Whether it's terrorist threats, sexting, vulgarity, bullying - all of that on social media is immediately trackable back to you, don't be naive about it."

It was a frightening start to the first week of school that involved every parent's worst fear.

"As a parent, you are always concerned about your child."