The alleged hazing at the Phi Gamma Delta fraternity was captured on video surveillance.
KFSN
By Doc Louallen 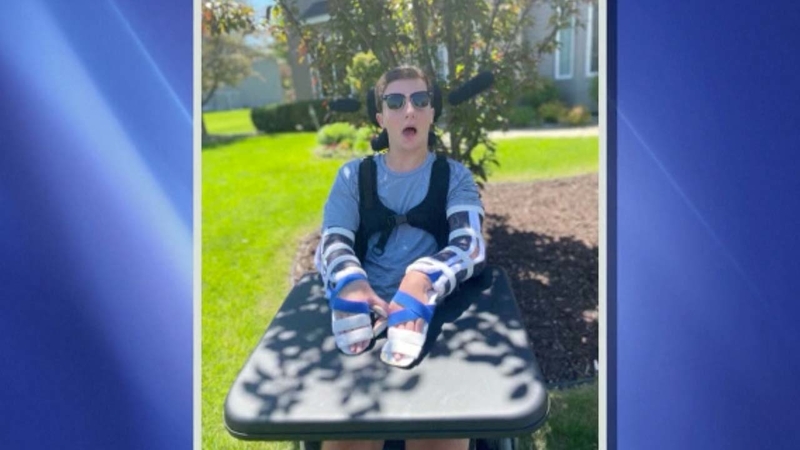 A University of Missouri student will need to be cared for for life after suffering a severe brain injury from an alleged fraternity hazing incident.

Daniel Santulli, 19, cannot talk or walk and lost his vision after allegedly being pressured to drink a bottle of vodka at the former Phi Gamma Delta fraternity last fall.

"I saw Danny in the medical ICU at the hospital at Mizzou. And it's just -- it's just a bunch of tubes everywhere," his brother, Nick Santulli, told ABC News. "And that's an image that will probably never leave my head."

According to the Santulli family lawsuit, Daniel was pressured to drink an entire bottle of vodka. In video footage, one of the fraternity members is seen using a tube to pour beer down into Santulli's mouth while consuming the liquor.

Just before 11:00 p.m., the video footage captured him losing balance and falling backward. Fraternity members pick him up, take him to another room and place him on a sofa.

Santulli starts to fall off the sofa around 12:42 a.m., where he appears unresponsive. Fraternity members transported Santulli to the nearby University Hospital.

According to medics, when Santulli arrived, he was in cardiac arrest and was not breathing. His blood-alcohol level was a near-lethal .486. Santulli spent six weeks in the hospital before being transported to a rehabilitation center in Colorado. He was finally reunited with his family seven months later in Minnesota.

"They knew he was in distress and his lips were blue. Nobody called 911. A 6-year-old would've called 911," his mother, Mary Pat Santulli, told ABC News. "Doctors told me my son will need care for life. He still not talking or walking. He's in a wheelchair. He lost his vision."

According to the family's civil lawsuit, they had recently settled against 23 defendants.

The university has revoked the fraternity charter and proposed sanctions against 13 of its members. One of the members was charged with two misdemeanors for supplying alcohol to a minor.

Santulli's family believes he was hazed and said it breaks their hearts to see members walk around campus as if they did nothing wrong.

"I want to see specific kids get [Class D felonies]. That's going to wake them up," said Daniel's father, Tom Santulli. "Misdemeanors won't wake them up."

Prosecutors said an investigation is ongoing, and they will file additional charges if appropriate.