'He didn't deserve to die like this': Unable to escape, 62-year-old man dies in Corcoran fire

The cause of the fire remains under investigation but Kings County Fire says there were no smoke detectors in the mobile home.
KFSN
By Elisa Navarro 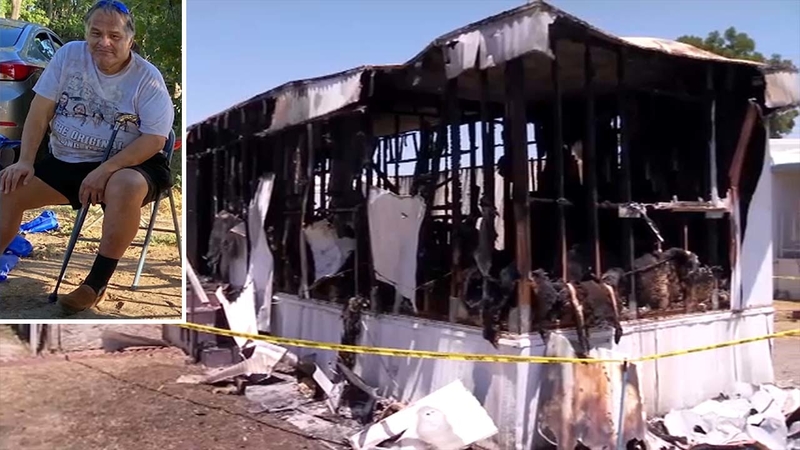 CORCORAN, Calif. (KFSN) -- A mobile home fire in Corcoran has claimed the life of a man who was well-known and loved in his community.

Family members say 62-year-old Arthur Navarro was unable to escape when his home went up in flames.

Navarro had a physical disability that made it difficult for him to walk.

Not much is left of the mobile home on Whitley near Dairy Avenue where Navarro lived for about 20 years.

Pedro Andrade was his neighbor and longtime friend.

The tragedy happened minutes before sunrise around 5:30 on Monday in Corcoran.

Police and Kings County firefighters responded to a structure fire, and found Navarro's mobile home engulfed in flames and later discovered his body inside.

Neighboring homes were evacuated for safety.

Andrade teared up sharing his experience. He says he was woken up by someone before first responders arrived to evacuate him, and he ran to Navarro's home in hopes of saving him.

"I opened his door but I was surprised when a burst of flames gushed out," says Andrade.

Navarro's niece Angelica Hill and longtime friend Shannon Nolan say he was surrounded by people who loved him dearly.

"He had a huge heart, he loved a lot, he loved all of his nieces and nephews and his family. He was a really good guy," they said.

The cause of the fire remains under investigation but Kings County Fire says there were no smoke detectors in the mobile home, which could have changed the outcome of the morning.

Andrade said it was only a matter of minutes before the home was engulfed in flames.

Kings County Fire says a fire in a mobile home will always spread a lot quicker.

Foul play does not appear to be a factor at this time.

If you want to help the family, visit their GoFundMe.