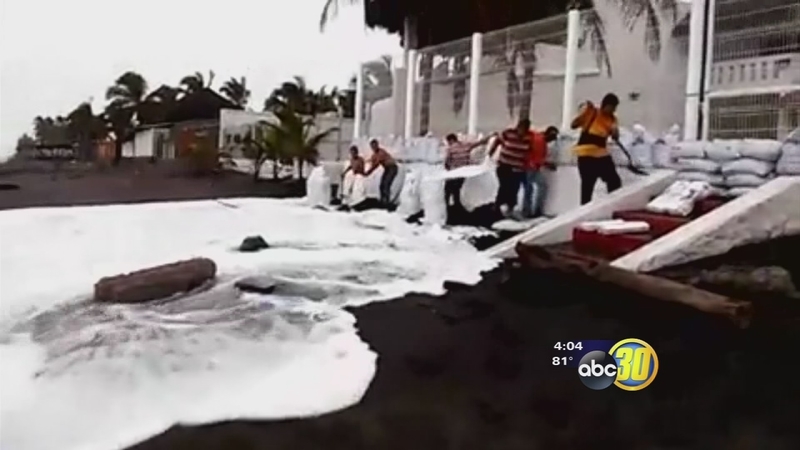 FRESNO, Calif. (KFSN) -- The potentially devastating storm has some people from the Central Valley stranded in Mexico and seeking shelter.

Action News spoke to several people who are nervously waiting for the worst part of Hurricane Patricia to hit their areas. After evacuating their vacation properties they are now seeking shelter with thousands of others.

Fresnan Chris Cota told Action News about people boarding up businesses, condos and other buildings near the beach as Mexico braces for the damage expected by Hurricane Patricia. The category five storm is the strongest on record in the western hemisphere.

"The anxiety levels is moving up you know but everyone here seems, we're in one of the best spots for the storm, so, down in old town the curbs are real high so the water rushes when you walk down the street, the curbs are high so there's going to be some major water coming down, major floods, so that's one of the concerns for locals here."

After boarding up his townhouse Cota moved further up hill to a resort. Earlier in the day he showed us how workers were boarding up the large windows of the hotel's restaurant. "They're boarding up everything, getting water and food. And at the hotel they're putting everyone in one big ball room," he said.

Marta Lopez, from Madera, told us she's worried about her uncle and grandpa in Mexico right now. Her uncle has been posting video of the storm so far and photos which show sandbags being filled and police standing by to help in the emergency.

We also spoke to Fresnan Rosita Marroquin and her boyfriend Bob Daly who shared with us video from Nuevo Vallarta. The couple was staying at the Grand Mayan Hotel. Now they're cooped up with three thousand other tourists at a three story, boarded up office building to stay safe.

Cota says late this afternoon the hotel moved everyone underground to a parking garage for safety. "Communicating with family and friends for now and until we have electricity and internet so got my phone charged and got my charger and portable charger."