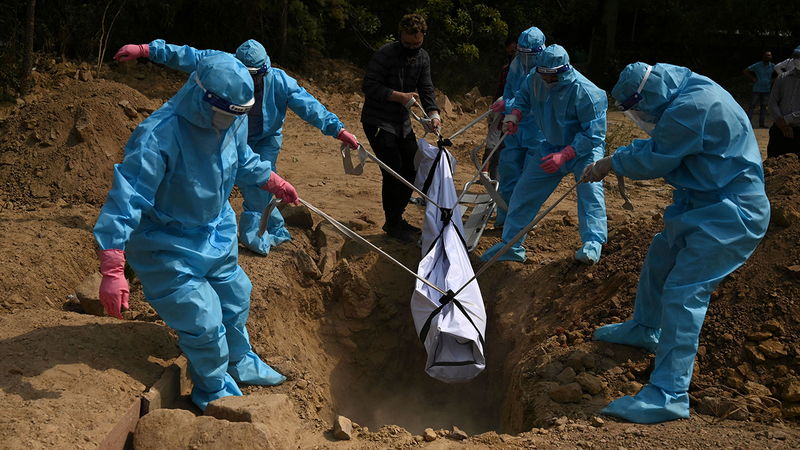 The country's health ministry reported a record 4,187 fatalities for the previous 24 hours, as well as more than 400,000 new infections for the third day in a row. India has now reported more than 21 million cases and 238,000 related deaths since the pandemic began.

The spiraling crisis is stretching India's health care system beyond breaking point. Beds, oxygen and medical workers are in short supply. Some COVID patients are dying in waiting rooms or outside overwhelmed clinics, before they have even been seen by a doctor.

In Tamil Nadu, officials announced a two-week lockdown -- a day after the southern state saw its biggest daily spike in infections, with 26,465 cases reported on Friday.

Starting Monday, all non-essential shops in the state -- including state-owned liquor stores -- will be closed. Restaurants can only provide takeout, while grocery stores will open from 8 a.m. to 12 p.m. Food delivery services will also be limited.

A number of Indian states have imposed complete lockdowns this week, from the northwestern state of Rajasthan to Karnataka in the south, despite Prime Minister Narendra Modi's earlier warning the measure should only be considered as a last resort.
"In today's situation, we have to save the country from lockdown. I would request states to use a lockdown as their last option. We have to try hard to avoid lockdowns and focus only on micro containment zones," Modi said in late April.

India imposed one of the world's largest and harshest lockdowns in March last year, when the country of 1.36 billion people had reported little more than 500 coronavirus cases and 10 related deaths.


The nationwide measure was announced with less than four hours' notice and little planning, triggering a migrant crisis. It also brought the country's economic activity to a virtual standstill, and with businesses, factories and construction sites ground to a halt, its economy contracted by 24% from April to June -- India's worst slump since records began in 1996.

The EU plans to provide additional support to India, the European Council President Charles Michel tweeted on Saturday.
The statement came as part of an announcement made by Michel on an alliance with Modi, which will start "a new chapter in the European Union and India strategic partnership."

Additional oxygen cylinders, ventilators, and vials of the antiviral drug Remdesivir arrived in India from around the globe on Saturday, according to India's Ministry of External Affairs spokesperson Arindam Bagchi.