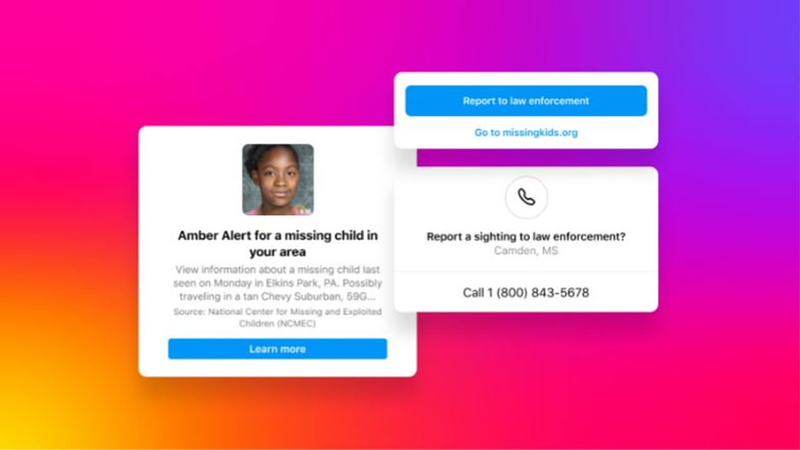 SAN FRANCISCO -- Instagram on Wednesday began rolling out an Amber Alert feature on its platform to notify users of missing children in their area.

The alerts, which will be available in the United States and two dozen other countries, will include details about the missing child, such as a photo, description and location of the suspected abduction. It is designed to be shared with friends on the platform to further spread awareness.

"We know that the chances of finding a missing child increase when more people are on the lookout, especially in the first few hours," Emily Vacher, the director of trust and safety at Instagram's parent company Meta, said in a blog post announcing the new feature. "With this update, if an Amber

Alert is activated by law enforcement and you are in the designated search area, the alert will now appear in your Instagram feed."

The alerts are "rare and specific to the search area," Vacher added, saying that if a user gets one, "it means there is an active search for a missing child nearby."

Facebook launched Amber alerts on its namesake platform in 2015. Its rival, Google, also began issuing Amber alerts to users of its Search and Maps tools in 2012.

To target the alerts, Instagram said it will use the city listed on a user's profile as well as the user's IP address and location services (if the user has this feature turned on). The update was developed in partnership with organizations including the National Center for Missing & Exploited Children, according to Vacher.

"We know that photos are a critical tool in the search for missing children and by expanding the reach to the Instagram audience, we'll be able to share photos of missing children with so many more people," Michelle DeLaune, president and CEO at the National Center for Missing & Exploited Children, said in a statement accompanying Meta's announcement.