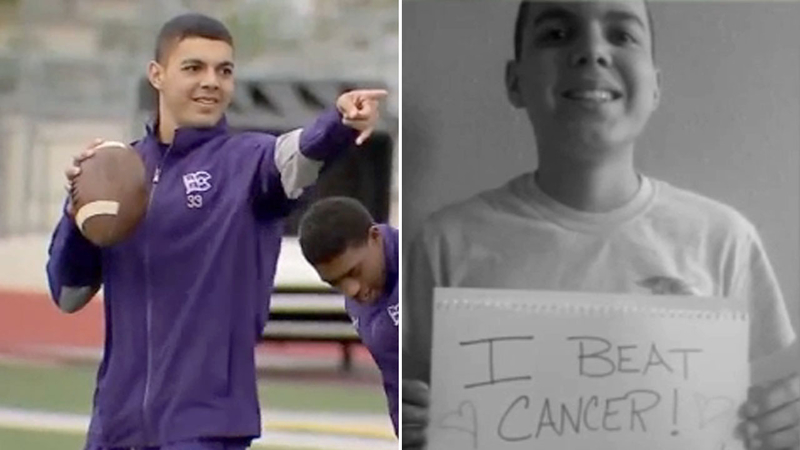 HS athlete back on field after beating cancer twice

KLEIN, Texas -- Jacob Munoz has had to fight for his life twice over already in his 17 years on earth.

Munoz, a student-athlete for the Klein Cain High School football team, has had family, classmates and the community behind him each time he has had to face cancer.

In 2015, he was first diagnosed with a rare and aggressive form of leukemia. After getting over the ailment the first time, Munoz was devastated again when his condition changed in 2017.

According to Munoz, the chemotherapy was the most challenging part of going through it all.

But in a happy turnaround for the young man, Munoz has been on the sideline with his Klein Cain team throughout this season, throwing footballs around and taking everything in stride. It was a big change from previous times we've visited with the teen in his hospital bed.

"I would say in September, I went in for an appointment and (the doctors) told me it was all good. They cleared me. They signed my physical and all my papers to get back out here," Munoz said when we caught up with him earlier this month.

When asked what his return means, Munoz, showing maturity for his age, compared it to any other ailment that could sideline an athlete.

"It's just not about football...It's just shown everyone who has been in any injury, tough situation, that they can come back from anything," he said.

It's just not his fight that inspired the team. The teen continues to do that for the person he is, according to his coach.

"He's a coach's dream," said Klein Cain head coach James Clancy. "He's the most selfless person I have ever encountered. And he's just been a leader, both emotionally, and obviously, by example, in how he carries himself."

Back in June 2018, Munoz came home to a celebration after exiting Texas Children's Hospital for his second victory over cancer.

He was escorted by riders from several motorcycle groups, the Texas Army National Guard, law enforcement members and other volunteers.

Most importantly to him, Munoz said he never wavered from his faith to keep him in the battle.

"I just believed. I never had a doubt that anything bad was going to happen," Munoz said, crediting his family and God for his recovery. "It just shows that anything is possible. You just gotta believe. It can be in any situation in life."

But whatever I am now, it is all because God poured out his special favor on me—and not without results. For I have worked harder than any of the other apostles; yet it was not I but God who was working through me by his grace. 1 Corinthians 15:10☝🏼🙏🏼 pic.twitter.com/nRcFQU1NTW