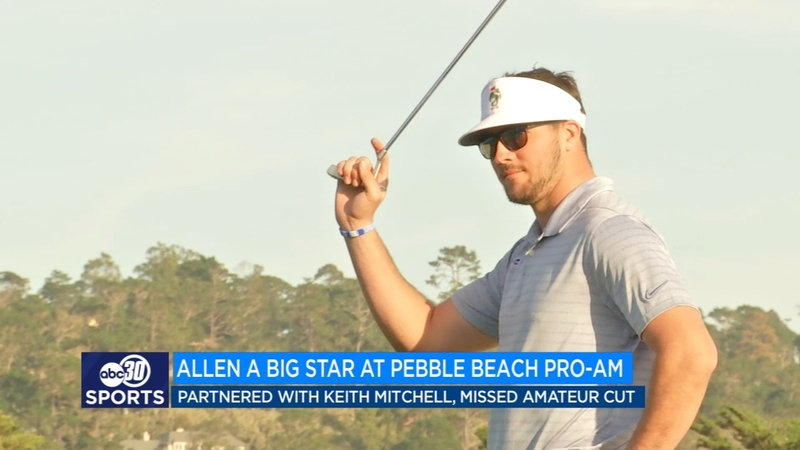 Just two weeks removed from a dazzling display in the NFL playoffs, Josh Allen put his skills to the test in another game teeing it up in the AT&T Pebble Beach Pro-Am.

For a tournament filled with celebrities from Bill Murray, to Jake Owen and Macklemore, maybe the biggest of the bunch was the Pride of Firebaugh.

On a moving day that saw three time major champ Jordan Spieth vault into contention, Allen made his playing debut at the tournament alongside professional golfer Keith Mitchell.

"Just to be out here and to be a part of this it's pretty special," Allen told Action News. "Obviously I wish I was in a different spot but it's a close second being right here."

Jerseys with Allen's number 17 following his group en masse with fans eager to leave with a memory with plenty making the short drive in from the Central Valley.

"Oh yeah there was a lot of Bills Mafia, lot of Central Valley, lot of Firebaugh's out there," Allen said. "This is an event that my family would go to as a kid and to know that now I got the chance to play in it was really special."

It was another family affair with Josh's dad on the bag as his caddy and aunts and uncles littered through the crowd.

"Yeah he's a pretty popular guy here today," his uncle John Allen said. "It's surreal to watch him but you know I know he's working on his second career as a professional golfer after he's done with football."

As for his game, Allen said because of the NFL season he hadn't played since July.

On his final hole, an errant approach bounced off the tent leaving him a shot over a bunker & tree with water behind the green.

Instead of hitting his shot he "Got my hand wedge out" throwing it near the green. "Keith (Mitchell) came up to me and was like dude you gotta throw this they're going to go crazy."

Allen missed the amateur cut of -19 shooting -15 over three days.