Pictures show boats crammed together, broken pieces floating and some of them on their sides.
KFSN
By Elisa Navarro and Nic Garcia 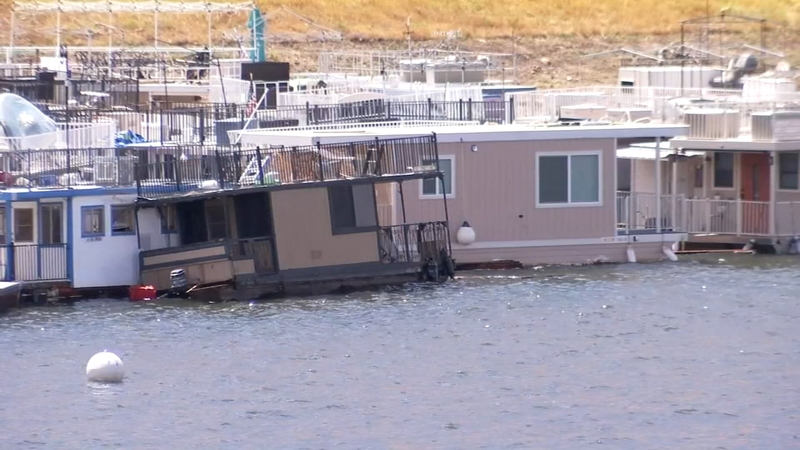 Houseboats at Lake Kaweah damaged, submerged under water by storm

The wicked weather stuck around throughout the day and caused damage to everything from boats to utility lines.

The storms caused some houseboats to come unmoored at the Lake Kaweah Marina, damaging several of them.

Pictures shared by an ABC30 Insider show several houseboats piled up by the dam.

You can see boats crammed together, broken pieces floating and some of them on their sides.

Action News has learned at least eight boats are under water.

Kenny Ray's boat drifted away when the docks were destroyed. He's thankful it only suffered a few scratches.

A summer storm swept through the Central Valley Wednesday, causing problems for thousands of people.

He says when he went to check on his boat Wednesday morning, he was shocked by the destruction.

"There's so many boats out there that just sank and the damage to a lot of them is just unreal when you get out there to look at it," he says.

"I didn't expect it at this time of year and not this bad. This was a storm; I don't think any of us was ready for the thunderstorm and the wind and rain we got last night."

According to the Tulare County Sheriff's Office, deputies scoured the boats to make sure no one was inside of them.

Three agencies are working together - the sheriff's office, Fish and Wildlife and the U.S. Army Corps of Engineers.

As far as what's next, officials say the boats will have to dragged out one by one.

More than 13,000 customers lost electricity throughout the day.

The winds also brought several trees crashing down in Fresno, causing costly damage to some residents.

But weather experts say skies will be clearing into the weekend, and summer heat is expected to return.